January 17, 2017
Without a doubt, the number one question I get from readers of True West magazine is "where do you go to get the truth about Old West gunfights?" The answer is quite simple: find the expert.

Case in point: when it comes to The Pleasant Valley War, there are several experts,  our own Marshall Trimble, being one of the best. But even Marshall defers to the late Don Dedera, who, as the editor of Arizona Highways, gave me my first break in illustration. Don spent 30 years researching all aspects of the infamous feud between the Tewksburys and the Grahams and his seminal book, "A Little War of Our Own" is the book I relied upon to get the truth about the opening salvo in that killfest that came off on July 22, 1884. 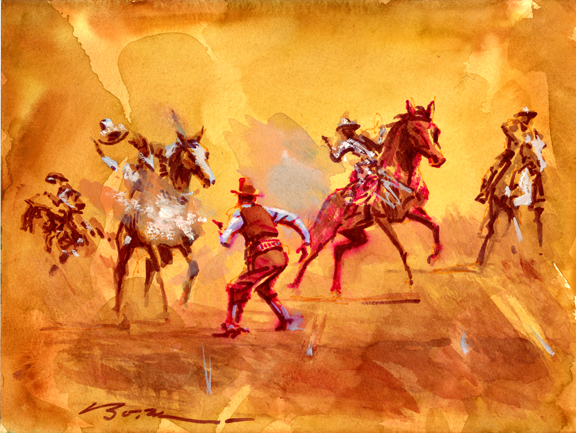 
Here's a sneak peek at my photo reference for another scene of the gunfight. Yes that is John Boessenecker's book, "Gold Dust & Gunsmoke" in the back, left. 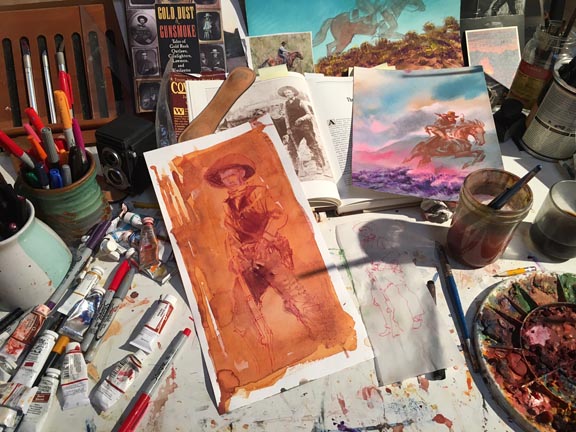 
And here's the final: 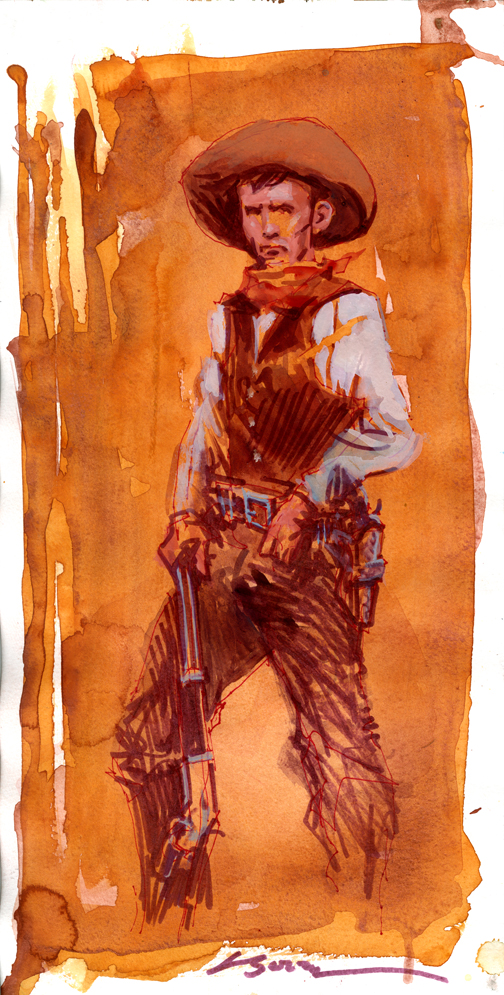 Both scenes are for an upcoming Classic Gunfight, "To The Last Man" which will appear in the March issue of True West.

Blaine, above, had a reputation as a bad man in Colorado before he came to Arizona. A little more than a week before the shootout at the Stinson ranch, where Blaine took a bullet in the jaw, he was in Prescott buying .45 cartridges. He allegedly told someone in the store he planned to "clean out some of the damn Stinson gang." When he rode up to the Stinson ranch ten days later with three other Tewksbury cowboys, the Stinson cow boss, Marion McCann, told the unwelcome crew to "move on.

Blaine, offended by McCann's rebuff, said, "You damned, fly-blowed son-of-a-bitch, I have been bulldozed by you long enough!" Blaine drew and fired his pistol, but missed, and took a bullet in the mouth and was knocked off his horse. Incredibly, he survived.

In 1921 Zane Grey wrote about the war in his book, "To The Last Man," and then expanded on it in  another novel "Tonto Basin." Both are long on romance and short on facts.

Dedera was a longtime columnist at the Arizona Republic before he became the editor of Arizona Highways. In the early 1980s he gave me my first assignment to go to Prescott and do a dozen small, spot drawings to help illustrate a feature on "America's favorite home town." Thrilled, I took the assignment and went to Prescott and drew everything I could find and see. I came back and turned in 22 illustrations, very few of them small. Don was somehow amused by my manic over-producing and ran every single one. It was the benchmark of my illustration career, so I have always had a soft spot for Mr. Dedera. But that is not to say he was a slouch in the wordsmith department. Don always had a way with words, as this persuasive passage illustrates, in his book, on how almost everything conspires against preserving history:

"A document untended, like a child or calf or lamb, may stray. Destructive coyotes rove everywhere. Raptors of ruin—fire and  mildew and acid and flood and radiation and inattention and pilferage—circle written knowledge in infinite patience. Faceless, faithful file clerks, not famous historians, are the shepherds of the past. And when an anonymous pastor of fact dozes on watch, a word or image may wander, allowing time's predators to pounce. Often, there is not even a small cry in the dark. Some precious fact voicelessly vanishes, likely forever."—Don Dedera, author of "A Little War of Our Own: The Pleasant ValleyFeud Revisited"