Froggy Hauan and The Hilarity of Robbing Norwegian Banks

April 25, 2018
Kathy and I met my Thompson, Iowa cousins last night at El Encanto Dos out on the Carefree Highway. Norm and Trudy Hauan are leaving today for home, after their annual winter stay in Arizona. 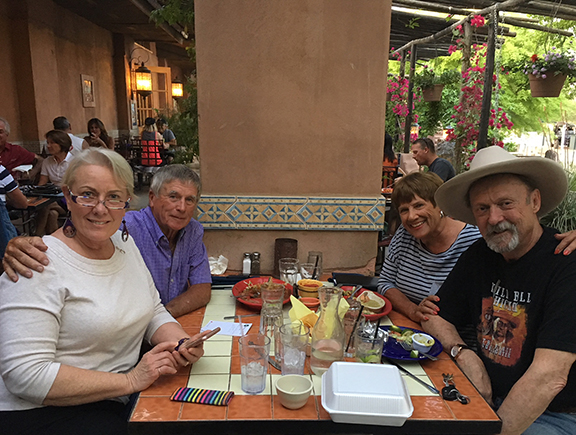 The Hauans and the Bells at El Encanto Dos

Left to right: Kathy, Norm, Trudy and BBB. Norm, 82, is legendary in northern Iowa where he is known as "Froggy" Hauan. He created an empire of farms that is still talked about today. My father was a big fan of Froggy and so I honor my dad by staying in touch with our Iowa kin. Norm and I are related like this: our great-grandfathers, Peter and Ingebrit Hauan were brothers. Norm is a descendent of Ingebrit, and Peter had a daughter named Minnie, who married another Norwegian farmer named Carl M. Bell and they had a son they named Allen Peter Bell (my dad's middle name was in honor of his mother's father). Unfortunately, my father was teased incessantly by the middle name—Peter—and always styled his moniker as "Allen P. Bell".

Like most extended families we love to talk about old times and one of my favorite stories is the time bank robbers hit the Peoples State Bank in Thompson in 1974. The robbers got away with about $7,000 and were never caught, but they forced the tellers and the customers on to the floor and then tied them up. It sounds terrifying but the way Froggy tells it is hilarious because he invokes the niceness of small town Norskys dealing with armed criminals. And, it helps that nobody was hurt. Norm asked me not to use several of the stories because some of the people are still alive, but one of the customers, "Shorty" Hagenson was forced on to the floor next to an attractive bank teller, Betty Johnson. Later, over a beer at the only bar in town, Shorty admitted, "I always wanted to lay with Betty Johnson, but there I was with my hands tied behind my back."

And, here, courtesy of the Thompson Courier, for your viewing pleasure are Shorty and Betty looking at the floor where they were forced to "lay" together. 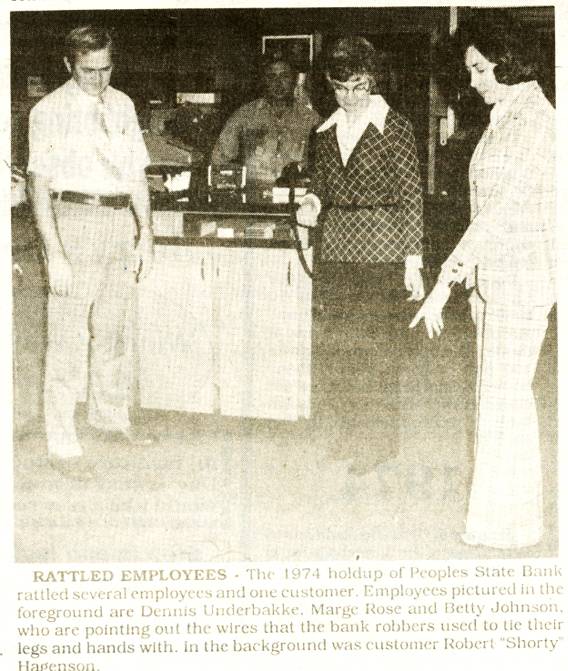 "Did you hear about the Norwegian farmer who loved his wife so much he almost told her?"
—Old Norsky Saying