April 19, 2018
We all have been abused by an overbearing storyteller. This usually happens at the bar, where they have a captured audience. 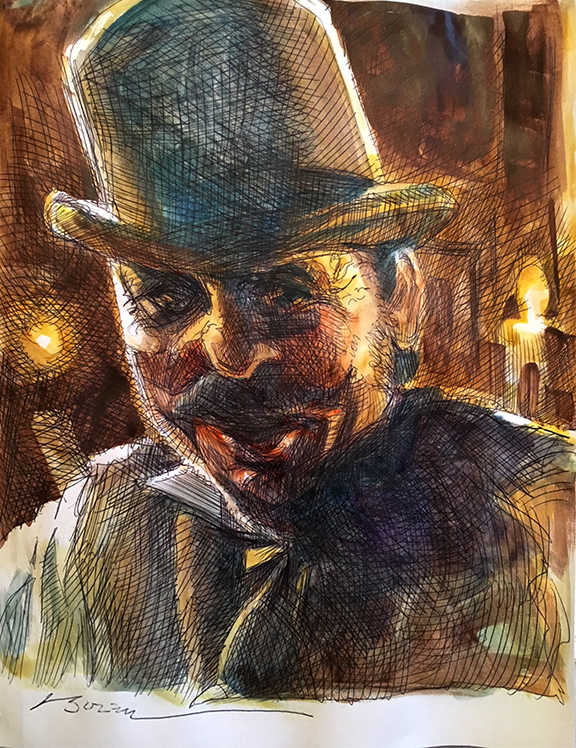 Daily Whip Out: "The BS-er at The Bar"

We have a tendency to flee from these BS-ers and, when asked why, we accuse them of telling windies, at best, and outright lies, at worst. The main reason for this is most BS-ers have a hard time getting to the point in an efficient manner. The problem stems from false flamboyancy, or, excessive, exuberant story-telling. Or, as my Texas friends like to put it, "If you can't improve on a story, you have no business telling it in the first place." Well, unfortunately, when it comes to "improving" a story, most BS-ers confuse quality with quantity. Just because you add a half dozen goofy set-ups and sidebars, doesn't make the joke, or the story, better.

On the other hand, some old-timers just have the gift. Thanks to the editor of Arizona Highways, Don Dedera, I met one of the best. Don gave me my first illustration assignment for Arizona Highways in February, 1985 for a story on everyone's favorite home town. I traveled to Prescott to meet and draw several Prescott living legends, among them Budge Rufner and Gail Gardner. 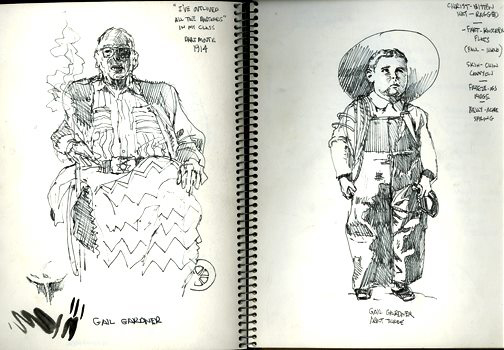 When I got to his house in downtown Prescott, Gail was in a wheel-chair in the living room with a hand-knitted afghan on his lap and chain-smoking. As soon as I came in he started with the stories and the whole time I was there, it was just one story after another, and they were all good. At one point, his caretaker leaned in from the kitchen, and yelled, "Gail, he's here to draw you, not interview you!" He didn't give a rip, and he never even slowed down. He just loved to spin tall tales. And, he never stopped smoking. When I joked he wouldn't live very long if he kept that up (he was in his nineties!) he just laughed and lit another one. As I continued drawing him he told many stories complete with outrageously funny locations, which I jotted down in the corners of my sketchbook, above; including "Fart-Knocker Flats," "Skin-Chin Canyon" and "Freeze-Ass Ridge." There were more, but I couldn't write them down fast enough. When I asked him how a place got the name "Fart-Knocker Flats," he laughed, gave the location, and said, "These flats had big, round rocks all over the place and when you'd come ridin' hell bent out on to those flats, your horse would stumble and it would knock the farts plumb out of you." Even his asides were hilarious and I could have listened to him all day long. Here's the kicker: not once did I think of him as a BS-er. True, the stories were laced with tall tales, but he somehow rose above that.

His parting comment: "Nobody's had more fun than I've had." No BS there at all.


"A joke is a question, artificially inseminated with tension."
—Hannah Gadsby