From Billy the Kid to Atom Bombs

I have some empathy for Francisco Gomez from Lincoln, New Mexico. When he was 18 he met Billy the Kid at the McSween's home where Gomez worked. Both were about the same age and late in life, in 1938, Francisco was interiviewed by  the WPA Writers Project. Gomez told Edith Crawford that the Kid was a "nice young fellow, with light brown hair, blue eyes and rather big front teeth." Francisco added that his friend "always dressed very neatly."  The two even rode together in a posse and shot it out with two outlaws, one being killed, while the other "ran away." Francisco also had an earlier encounter with his boss's wife. In 1879 he gave an affidavit stating that he was seduced by Mrs. McSween and that he "had sexual intercourse with said Mrs. McSween. . .that this sexual intercourse became a frequent occurrence. . .chiefly in the brush near the river."

So, that's his back story.

Late In The Game, The Dawn of A New Light

Francisco Gomez led a full life. He rode with Billy the Kid and on Susan McSween. He survived them both. Now he is alone and all the others are gone. 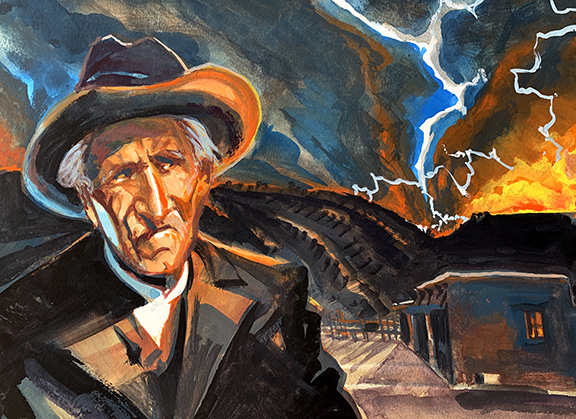 Late one July night in 1945 Francisco is witness to a blast of light coming over the mountains beyond Carizozo. The bright essence arcs across the Rio Bonito and up over the Capitans. As the light recedes he can feel the past slip deeper into the darkness. He has just witnessed, indirectly, the detonation of the first Atomic bomb at the Trinity Site of the Manhattan Project. From Billy to Atomic Bombs, now that is a stretch for one lifetime.