The Pecos Princess And Willie The Kid

August 8, 2020
So, it turns out, all the Regulators had a crush on the Pecos Princess. Here's a couple studies of this striking Texas beauty.
To those New Mexico bad boys she was Texas royalty, so I'm seeking a bit of a regal air, even though she was not high class or uppity at all, merely a pretty girl from Texas—in very rough country.
Yes, she was an 18-year-old Texas looker and her uncle was, none other than John Chisum, the Cattle King of New Mexico.
She definitely had a thing for the Kid. She wrote in her diary, on August 22, 1878: "Two candi hearts given to me by Willie Bonney."
When word came that he had died, she cried.
Everyone agrees she had a thing for "Willie Bonney."
So, he went by Willie? At least with Sally Chisum. What might that look like? 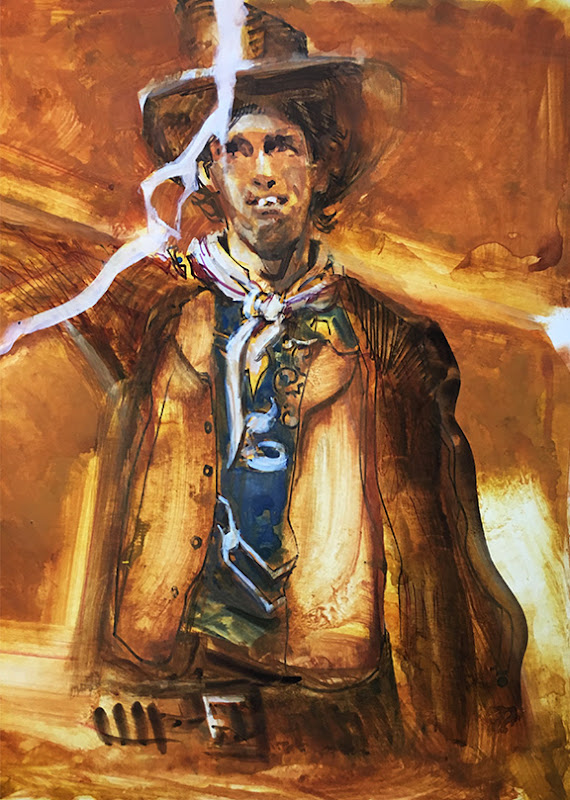 Daily Whip Out: "Willie The Kid"
Well, that's a new twist we haven't heard much about. Willie the Kid? In terms of becoming a legend, it doesn't have a very solid ring to it. Kind of wimpy, maybe? Or, it certainly evokes a slippery conotation? Hmmmm.
"What's in a name? Absolutely everything."
—Wet Willie, Jr.
Posted by Bob Boze Bell at 1:29 PM