Horse Dragging And Other Outlaw Behavior In Anton Chico

Like any artist or writer who wants to tell an authentic story I made a vow to visit all the Billy the Kid historic sites I could before I published my first book. I wanted to stand where he stood and, if possible, ride where he rode. That's why I found myself in a rental car, at dawn, on the quiet and pastoral edge of Anton Chico, New Mexico.

This historic New Mexican village on the Pecos River figured prominently in the Kid story. The outlaw gambled here quite often and enjoyed the company of several women in the area. He traveled extensively up and down the river, also visiting the communities of Llano Viejo, La Loma, Llano del Medio, Dilia, Colonias, Puerto de Luna and Old Fort Sumner. His nemesis, Pat Garrett, was married in the Anton Chico church, not once, but twice (his first wife died, so he married her sister in the same church in 1880). 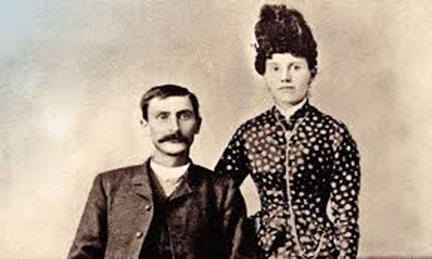 Newlyweds: Pat Garrett and Apolonaria
January 14, 1880, at Anton Chico.
They had nine children.

As I drove into the main part of the village I became very excited because it looked like time had stood still. I was armed with a 35mm Canon and a video camera, so I took many reference shots of all the wonderful adobe structures throughout the village.

For the first half hour I didn't see a living soul, except for this dog. 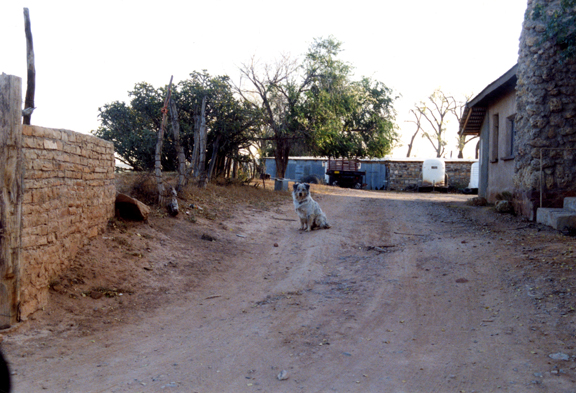 Then as I swung around by the church where Pat Garrett got married, I heard a loud dragging sound and turned, just in time to see this. 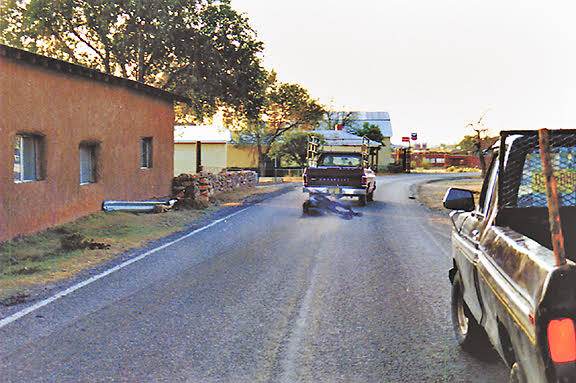 One of the Lucero boys dragging
a dead horse out of town.

Later, Mister Lucero came back by and we had a chat. 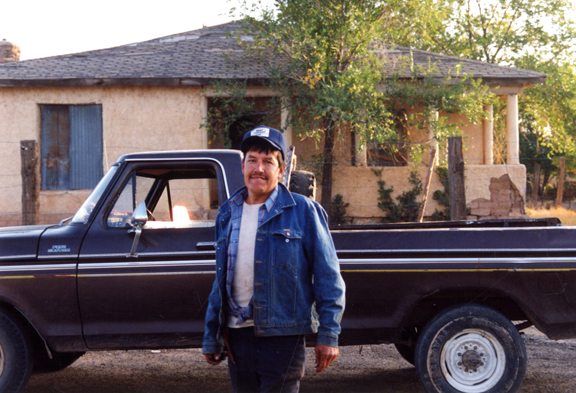 He wanted to know what I was doing in town and I told him I was on the trail of Billy the Kid. He seemed to believe me, we laughed and I went on my way.

I found out later, from some friends who live in Santa Rosa that I shouldn't have been driving around Anton Chico in a rental car, looking into houses and gawking. You know, they told me, that's the kind of thing a "gringo" does when they work for the DEA.

This is the kind of story, when you tell it to someone in law enforcement, like, say, John Boessenecker, he says, "Holy crap! You did what?!"

Anyway, I survived the visit and here's the bottom line. If I hadn't gone there and walked those streets and took those reference photos I wouldn't have been able to do this scene with any accuracy. 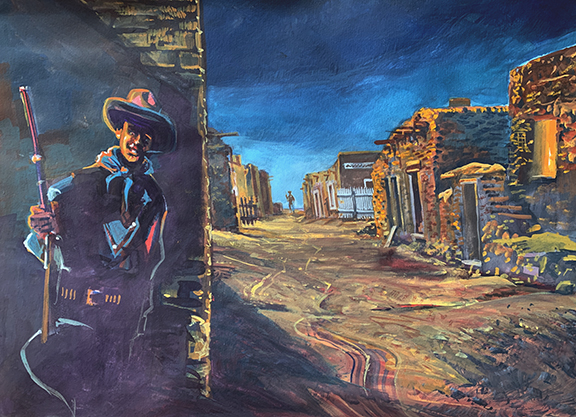 So, I've got that going for me.

"Travel is fatal to prejudice, bigotry, and narrow-mindedness, and many of our people need it sorely. on these accounts. Broad, wholesome, charitable views of men and things cannot be acquired by vegetating in one little corner of the earth all one's lifetime."