Money for Nothing, Part II

My daughter Deena saw the Facebook commentary where the guy claimed he had an uncle who went to school with me and that I actually hated cowboys and was only doing the artwork in True West magazine "for the money." Which prompted this question from my daughter: "Dad—what do you do when you see Crap like this? Besides forward it to us for our amusement of course. Do you respond to these crazies? Or 'Bozos' as we like to call them?" 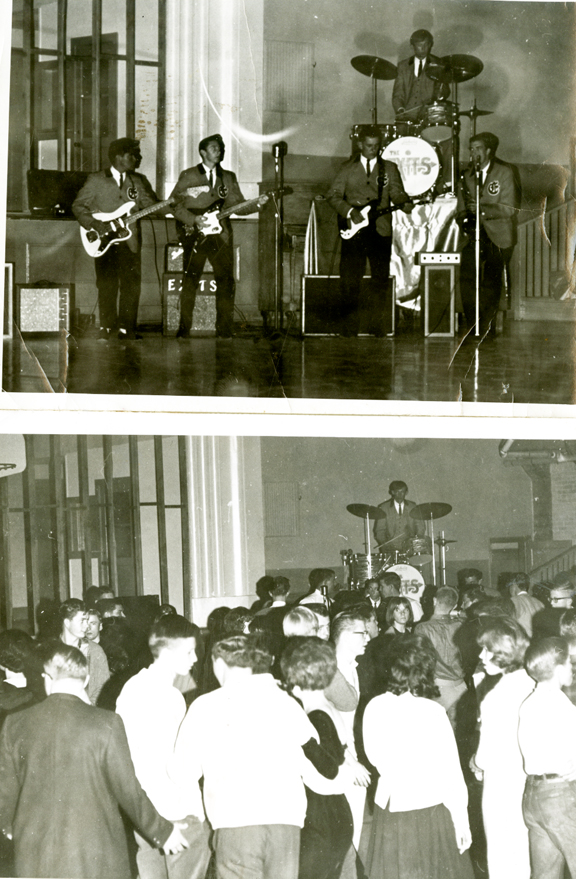 The Exits with me on drums, and yes, that is Richard Glancy goosing Grover Thomas, bottom picture. We played for half the door and made $208. I'm proud to say, we outgrossed the Rolling Stones because I read they didn't make a dime in 1964 because of road expenses. We lived at home too, so, naturally we all went to Central Commercial and bought new gas-powered turtleneck sweaters.

Money For Nothing, Part II

The only thing I can realistically do in terms of the Facebook comment is try to understand where this came from. I can't tell him off, or set the record straight, because then I look like a thin-skinned, overly sensitive artist, which, of course, I am. My hunch is his "uncle" is someone I went to high school with in Kingman and he remembers me being in the Exits with "long hair" (a modest Beatles cut, see above) and just assumed I was anti-cowboy, and, to be honest, from about 1964 to 1974 being a cowboy was about the last thing any rock 'n' roll drummer would  admit to admiring, much less emulate in paintings and artwork. So, in that regard he is maybe about half right. However, me doing it for the money is still totally hilarious.

"I love money. I love everything about it. I bought some pretty good stuff. Got me a $300 pair of socks. Got a fur sink. An electric dog polisher. A gasoline powered turtleneck sweater. And, of course, I bought some dumb stuff, too."