Paul Northrop passed away last week. I have to say Paul told the corniest jokes I have ever heard in my life. And believe me, we traveled many, many miles in search of the Kid and other history-related-misfits, so I heard them all. Some more than once. But, he always made me laugh in spite of the bad jokes, or, maybe even BECAUSE of them. Here is a picture I took of Paul in 1991, in Bob McCubbin's library, the day I met him for the very first time. 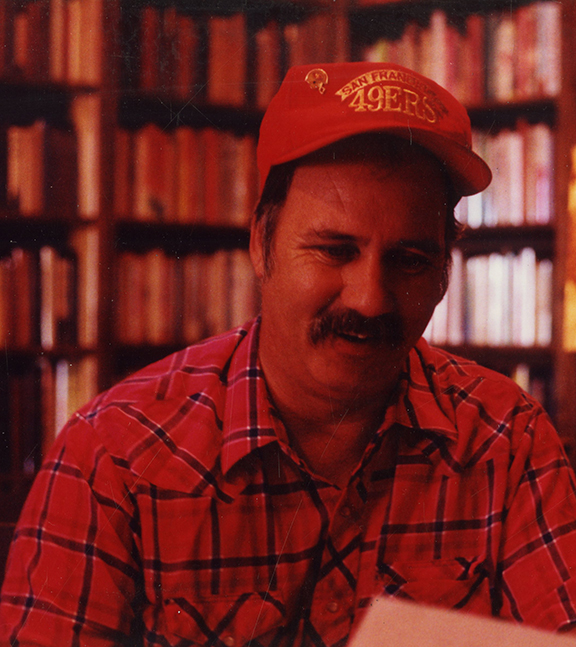 Over the years, we ended up taking dozens of history research road trips to various, far flung locations. For example, when I mentioned to Paul that Billy the Kid was sighted riding with the Jesse Evan's gang at Cook's Canyon, Paul drove me out there (the panorama I took of the canyon is in my Billy book). When I inquired about the ill-fated route John Tunstall and his men, including the Kid, took from the Tunstall Ranch on Seven Rivers towards Lincoln, Paul comandeered a plane and a local pilot and we actually took off from the Tunstall Ranch and flew the entire route, up and back. When we were in Tombstone in May of 1993 and several of us wanted to see Drew's Station where the infamous attempted stage robbery took place that launched the events that led up to the O.K. Corral fight, Paul found a local cowboy who knew where Drew's Station was. Only the corner of the main building remained, but here we are at the site. 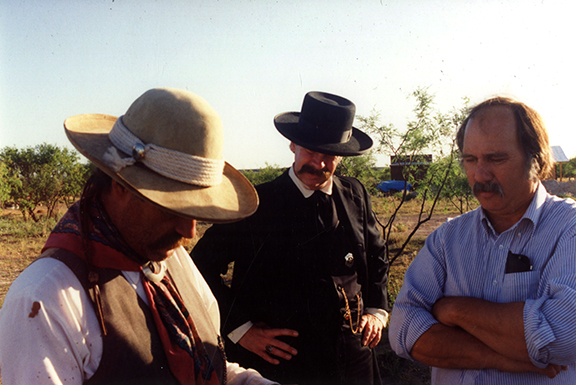 The Cowboy (who didn't want his name mentioned), at left, who took us to Drew's Station. That's Jeff Morey, center and Paul Northrop, at right, on May 28, 1993.

Same is true for Skeleton Canyon (site of Curly Bill ambush and Geronimo's second surrender), and the Sander's Ranch where John Ringo's body was found and even Canyon de los Embudos where Geronimo surrendered in Mexico, Paul went thru his connections at the border patrol and made it happen. But Paul's ability to get me into history sites even extended deep into Mexico. In 1996, Paul joined forces with a Mexican tour guide and Ed Mell and his son, and me and my son, joined Paul on an extended trip into Chihuahua (where Victorio was ambushed), then on to Chihuahua City (we visited Pancho Villa's house), up through Creel and Divisidaro on the Copper Canyon Railway and back to Janos, where Geronimo lived and raided. If there was a historic location Paul would not only find it but get permission for me to see it.

Loved the guy. While it's true the road is the only thing, the end is part of the journey. Adios my friend. See you down another road. I'm sure of it.

Recently, I've been studying the art of storytelling through the master, Shelby Foote.

The point I would make is that the novelist and the historian are seeking the same thing: the truth—not a different truth: the same truth—only they reach it, or try to reach it, by different routes. Whether the event took place in a world now gone to dust, preserved by documents and evaluated by scholarship, or in the imagination, preserved by memory and distilled by the creative process, they both want to tell us how it was: to recreate it, by their separate methods, and make it live again in the world around them.

This has been my aim, as well, only I have combined the two. Accepting the historian’s standards without his paraphernalia, I have employed the novelist’s methods without his license. Instead of inventing characters and incidents, I searched them out—and having found them, I took them as they were."

The Fashion Changes The Beach Remains The Same 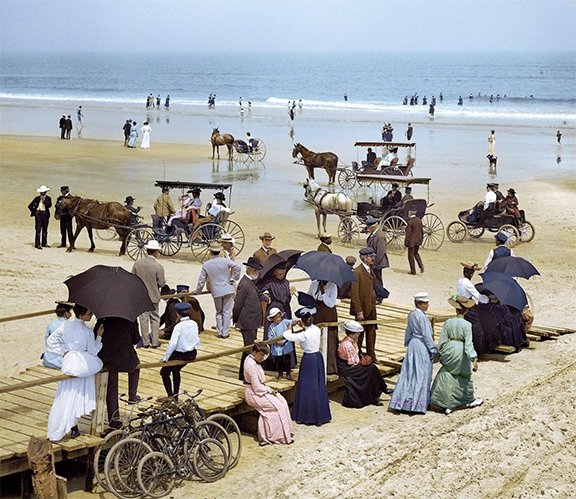 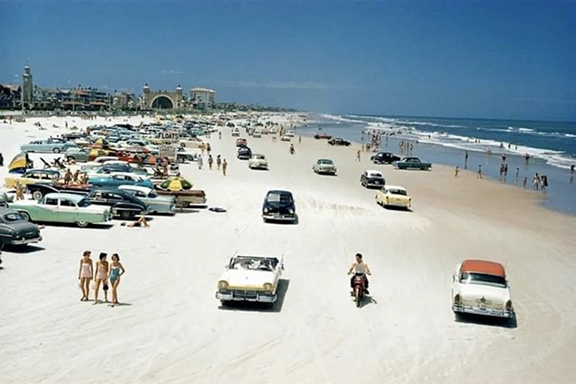 Each have their charms, each seem to be the end of the line in terms of "progress." And yet each one is slowly eclipsed by something newer and different, just like we are. And yet, the beach remains the same. Kind of endlessly weird, yes?

"The road is the only thing."