Who Was The Kid In The Crack Behind The Dead Daltons?

We just got this question from a reader:

"Looking at the postmortem picture of the Dalton gang in Coffeyville, there is, as I'm sure you know, a small boy peeking through a hole in the wall just above Tom Evans' body.  The boy has been identified as Ray H. Clark.  Do you have any information of whatever became of Ray H. Clark?  That little fact would make a great addition to the story of the demise of the Daltons!

Thanks so much,
Steve Merrill
Fresno, California 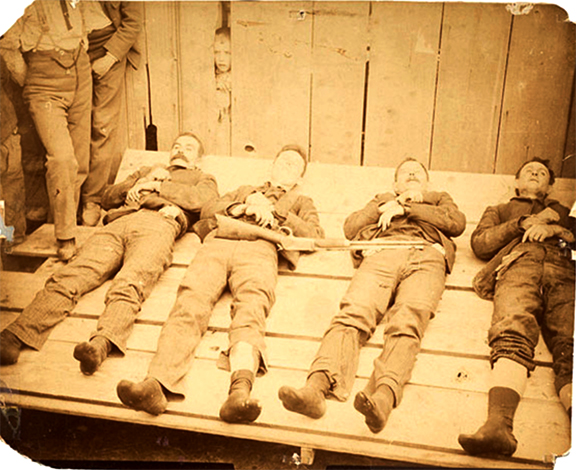 Dead Daltons & The Kid In The Crack

Here is what a Coffeyville historian, told us about the Kid:

"Ray H. Clark was born in Chanute on April 29, 1879 and he was 13 years old at the time of the Dalton Raid. In the 1900 Coffeyville Directory, Ray is listed as living at 502 W. 11th street. In the 1910 census Ray was listed as living with his older brother William and his wife Nellie. On September 12, 1918 Ray filled out a WWI registration card. He was 39 years old and by this time he was living in Portland, Oregon and employed by the NW Steel Co. as a shipfitter. He was married twice and died on September 22, 1949 in Portland, Oregon of a heart attack. His body was sent to Coffeyville, to be buried in Fairview Cemetery where both his parents are buried."

Thanks to Amy Dollar, who is the tourism director for Coffeyville, Kansas, for rounding up this fascinating information for us. This is what I love about my job. Getting to talk to the people who have spent their lives studying our amazing history. It doesn't get any better than this.

"A nation that disdains its past has no future."