Greed May Be Good But This is Bad

I'm still deep into Robert McKee's masterful book on "Story," or, more accurately, the book on how to write a successful story. He often refers to old films like "The Battleship Potemkim" (1925) which features an action scequence way ahead of it's time. Known as "The Odessa Steps," the sequence has masterful camera movements and a superb visual technique way ahead of its time. The rest of the movie is rather painful to watch, like most silent pictures, the actors are from the ham-fisted, over-dramatic school of performance and it just comes off as amateurish and hokey to a modern audience.

Another film McKee references more than once in the book is "Greed" from 1924, known for its clever twist ending. According to McKee, Erich von Stroheim filmed "the climax over three days and nights, hero and villain, across the Mojave Desert." He also apparently shot it in the summertime at Death Valley "with temperatures rising to over 130 degrees." He almost killed the crew but McKee claims von Strhem "got what he wanted." McKee claims  Greed's "brilliant ending is created out of ultimate choices that profoundly delineate it's characters." So, I wanted to see what all the hub-bub is about so I talked Kathy into watching it with me, and, boy howdy, was that ever a mistake. 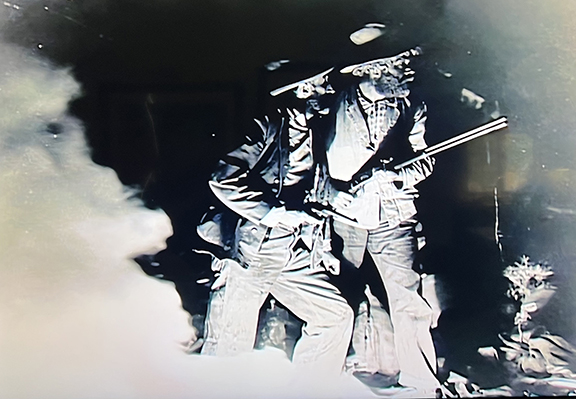 Some of the scenes are dramatic (this is a still from the movie, above, and the filmed sequence was lost) and well staged, but most of the film is tedious and slow moving and virtually all the acting is, once again, ham-fisted on steroids. According to film lore, von Stroheim filmed 49 reels—ten hours!—and when the studio demanded he cut it, he trimmed it to four hours and said he could not take out another frame. MGM supposedly trimmed it to three hours. After watching an hour we decided to call it a night and get up today and see if we could fast forward to the last ten minutes to at least see the classic climax everyone is talking about. Fortunately, at least for me, at the three-hour-and-forty-five-minute mark, we get a posse in Death Valley and man o' man, check out the background players in this closeup. 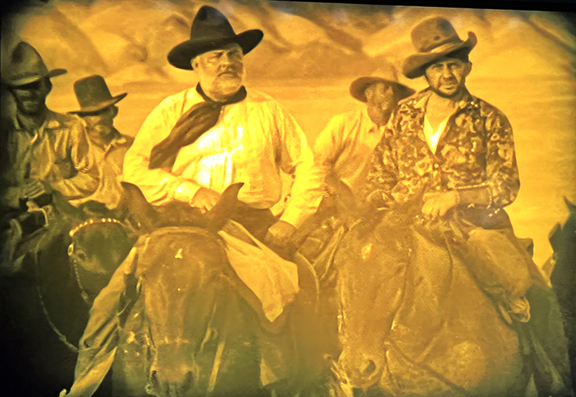 Real cowboys in the background
And, by the way, the film moves into sepia tone in some sequences and I'm not sure if this was in the original or the folks who did the salvage job added the semi-color. It is known that van Stroheim added hand colored gold to gold teeth and gold canaries, etc. 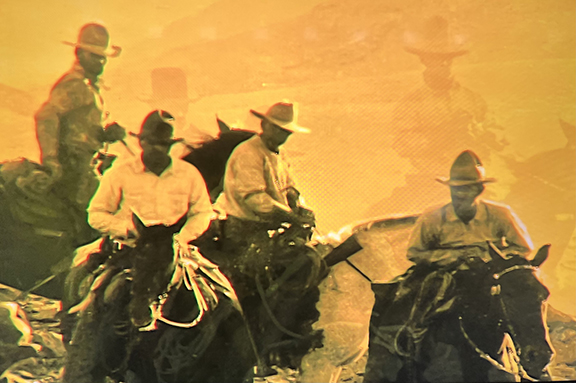 Another shot of the Death Valley posse

The punched-in-crown hat style appears to still be alive and kicking in 1924 as three of the riders in this posse are wearing a version of the style (keep in mind Billy the Kid wears a punched-in-crown in his only known photo from 1880). These cowboys were born around the turn of the century, and it also must be noted, Wyatt Earp could have seen this movie when he lived in LA (he died in 1929). What I'm saying is "Greed" was filmed less than three decades after the actual Old West ended and so the outfits and gear are very interesting to see.

A couple saloon scenes stood out for me, like this one. 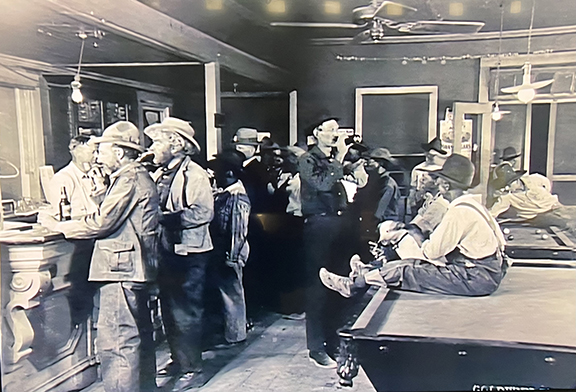 I especially like the real cowboy in the background showing off with his behind-the-back, pool shot. Here he is in all his cowboy "check-this-out" coolness. 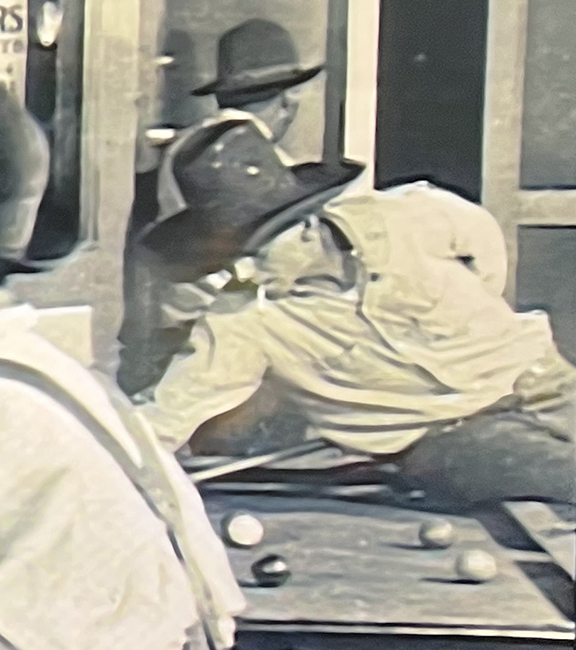 Here's another shot in the same saloon. Check out all the great hats. 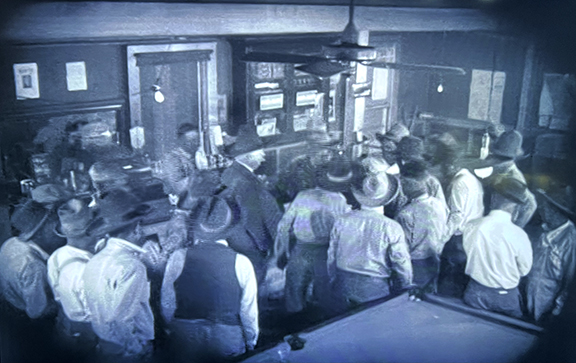 And so we finally came to the ending and after a B Western fist fight the guy on the right, below, is killed, but before he dies he manacles the bad guy, at left, to his wrist and they both die in Death Valley. Was it worth the wait? 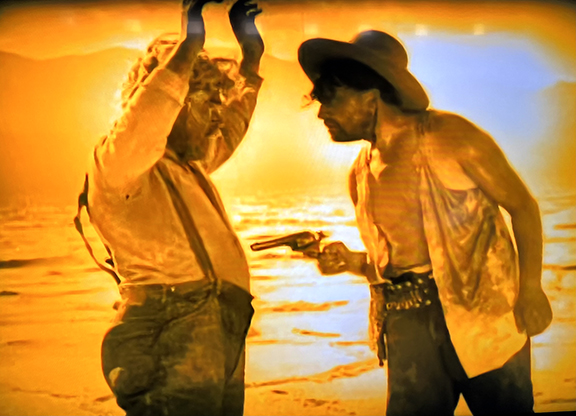 Other than the cool hats, I have to agree with Variety.

"Despite its excellent acting, fine direction and the undoubted power of its story. . .it does not entertain."