A Bloody Gift to Remember

On the evening of December 23, 1888 Gauguin said he was going out. Because of rain and bad weather, the two artists had been cooped up in the Yellow House for several days. As Gauguin walked across the public park towards the ancient gates of Arles, he heard someone behind him walking quickly. He turned and what he saw scared him. 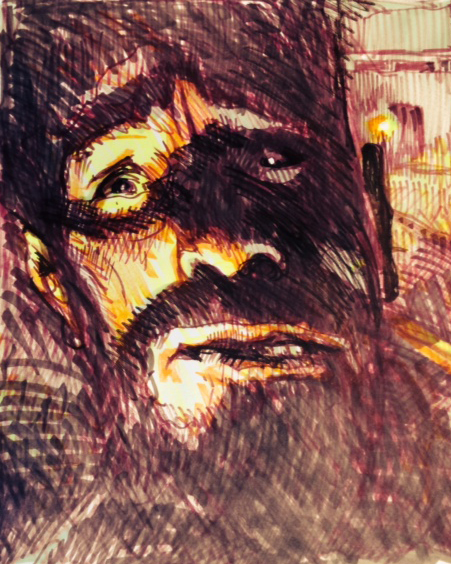 Daily Whip Out: "The Face of Madness"

"You are going to leave?" Vincent demanded.

Without another word, van Gogh stepped forward and handed Gauguin a story from the day's newspaper and pointed to the last line, "Le meurtrier a pris la fuite"—the murderer has fled.

Perhaps Vincent meant that Gauguin was murdering the dream of an artist colony in the south of France. Perhaps he meant it literally, "Hey, dude, you're killing me here." Either way, it was passing strange, as they used to say in my hometown.

Gauguin walked on and Vincent fled into the darkness. Van Gogh never could recall the specifics of what happened next, only that he was having "mental fevers" and hallucinations. He returned to the Yellow House and climbed the stairs to his bedroom, going to the corner where the washstand stood. When he looked in the mirror he saw only one thing: The Wretched Loser who had failed his family, killed his father, all but bankrupted his brother and blown the artist colony he so desperately wanted to build in Arles. And so he pulled out a straight razor, grabbed the ear lobe of the Loser and pulled it straight out, and sliced off his ear at about the midpoint, cutting diagonally, clear to the jaw. The gristle at the end was a little tough, but he got it.

Madness And Bullfights
Before Gauguin had arrived in Arles, van Gogh had gone to the bull fights and was impressed with the Spanish pageantry and especially the tradition. He even painted a picture of it. One of the traditions is that at the end of the bull fight the matador presents the ears of the bull to someone in the audience, usually a woman. Van Gogh took his severed ear, wrapped up in a newspaper (perhaps the one with the article he showed to Gauguin?) like a piece of deli meat, and walked it to a brothel and asked to see "Gaby," a stage name of an "actress" named Rachel, who was one of Gauguin's favorites. The bouncer would not let him in, so he handed the package to the bouncer and asked him to take it to Rachel with the words, "Remember me."

I think it's safe to say she never forgot him or that gift!

Bleeding like a stuck pig, Vincent returned to the Yellow House. Later, Gauguin wrote that the entire house was covered in blood and the whole town showed up and he, Paul Gauguin, was arrested for the bloody deed. 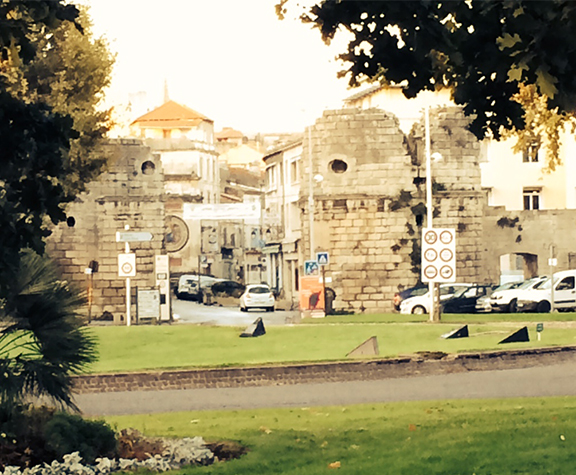 When we were leaving Arles, I took this photograph of the park Paul Gauguin was walking thru on December 23rd, 1888 on his way to the brothels, beyond the ancient gates of Arles just beyond the signs. This is about where he was when he heard something behind him. The whore houses were down one of the streets that veer off from the Roman guard towers (behind the signs).

And, by the way, Gauguin was the last person to see Vincent with two, intact ears.

"If you are going to be an artist people remember you need to stand out."
—Old Gallery Owner edict