October 12, 2015
Many artists do not like to have people watch them draw. I am one of them. When Mrs. Bonelli would come around in sixth grade to see how we were doing in art class, I would shield my drawing with my right arm to cover my work. I was hiding my work from criticism and judgement. It takes a special breed of cat to enjoy drawing in public. Steve Benson is one member of my tribe who seems to enjoy it. The longtime Arizona Republic editorial cartoonist told me he once even did a stint as a mall artist, plying his wares by doing quick cartoon portraits of passersby for $10 and $20. That takes a certain kind of confidence and bravery I don't have.

That's why Vincent van Gogh's fearlessness at drawing in public is breathtaking. He reported in letters to his brother Theo that when he was drawing on the streets of The Hague, he would constantly get catcalls and unwanted criticism. One time a ruffian spit tobacco juice on his drawing as he was working. All the jerk's pals laughed.

As he got older and crazier, Kids threw rocks at him and played terrible tricks on him, like putting a snake in his paintbox when he wasn't looking.

When Vincent was traveling he often spent the night at a random home that would take him in and he would invariably draw pictures of the kids to leave as a token payment for his appreciation of their hospitality. More than one old woman who was interviewed in the 1920s, when asked what they did with van Gogh's drawings, reported, "We used the paper as kindling for our fireplace." 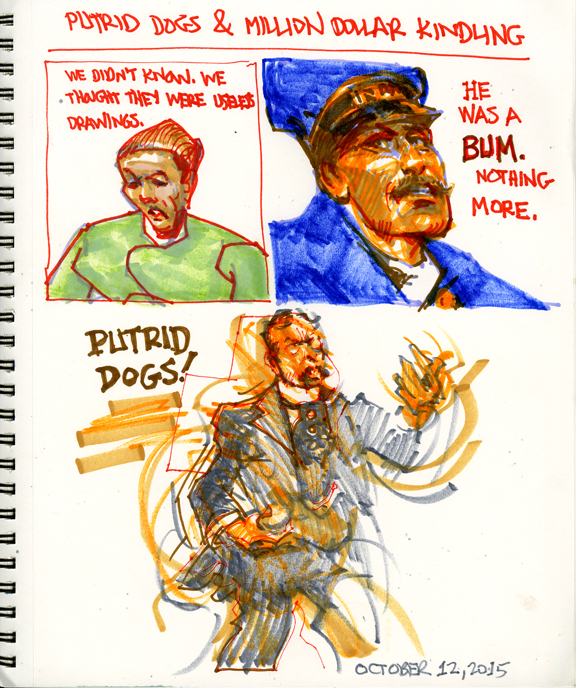 When Vincent attended a university class in drawing at Antwerp in 1886, he set up his easel and attacked his sketchbook with a ferocity that took the other student's breath away. When the professor, Charles Verlat, came in and looked at what Vincent was drawing, he thundered, "Who are you?" Van Gogh answered, "Well, I am Vincent, a Dutchman."

The teacher was aghast. "I cannot correct such putrid dogs! My boy, go quickly to the drawing class." Vincent gathered his gear and left the class in humiliation.

But his humiliation wasn't just confined to the classroom. On the streets of The Hague, people mocked him as he tried to work. "They laughed at me," Vincent wrote, "and made fun of me."

But until the day he died, he never stopped going out in public to draw and paint. For this alone, he has my admiration.

"In spite of everything I shall rise again. I will take up my pencil."
—Vincent van Gogh