Van Gogh by The Numbers: Read 'Em And Weep

October 7, 2015
Interesting that no one to my knowledge has attempted to illustrate Vincent van Gogh's mutilated ear. He evidently made no effort to cover it and several who saw it at Auvers claimed it looked like a "gorilla's ear." And that it looked "mangled." Of course, he didn't cut off the entire year, but sliced off the lower half, at an angle. Here is my first attempt to capture this weird deformity: 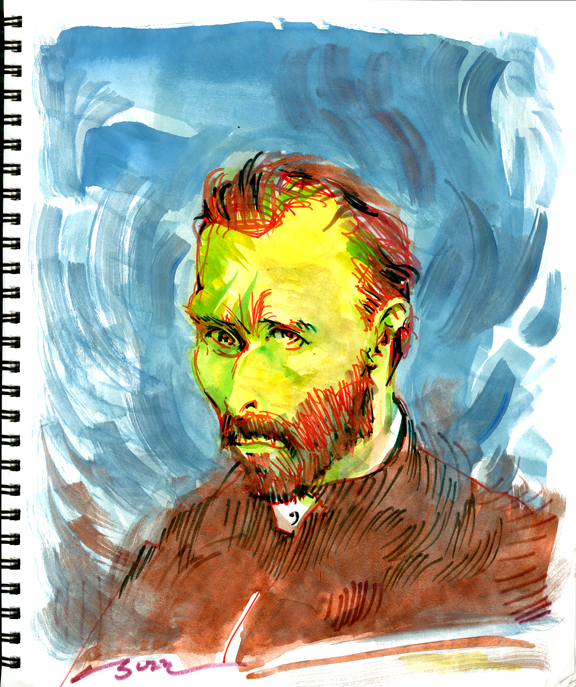 Van Gogh By The Numbers

800 number of letters to family members that survive (Vincent regularly burned Theo's letters after   reading them).

23 number of places he lived, including 3 different places in England, 10 places in Holland, 6 places in Belgium and 4 in France.

4 number of languages he spoke: Dutch, German, English and French.

93 number of publications by 1973 that had attempted to diagnose van Gogh's illness; 13 suggested schizophrenia, 13 predicted epilepsy, 5 proposed both. Others pointed to alcohol, absynthe and syphilis. Some chose a combo of all the above. Today the popular culprits seem to be a bi-polar condition with "temporal lobe epilepsy." And the syphilis and the alcohol—and absynthe—exacerbated everything else.

10 number of years he actually attempted to be an artist. 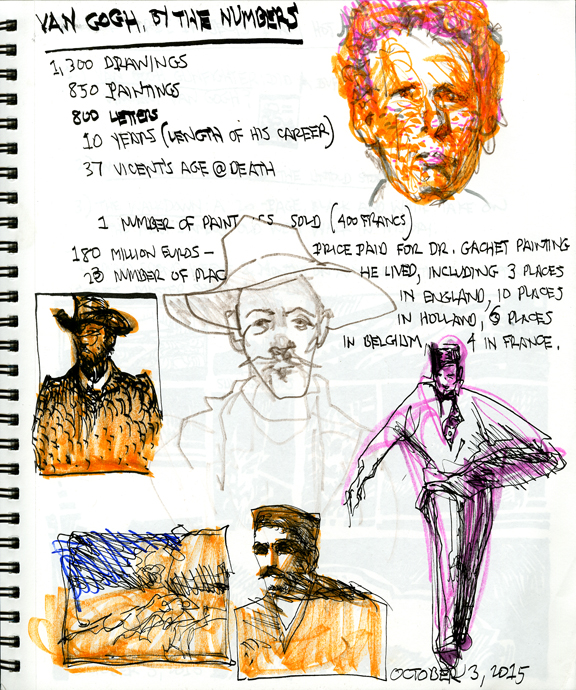 Daily Whip Out: "Van Gogh By the Numbers"

Read 'em and weep
Tragic numbers. Too sad, but then that's why he is an icon and legend. Take out the cutting off of the ear and would he be as big a deal? Nope. Take out his tragic death? Nope. Take out the fact that the world hated his paintings at the time? Nope. It all plays together to form what Ingo Walther recognized as "the staggering simplicity of his paintings."

"My pictures are of no value; though of course they cost me a very great deal, at times even my blood and my brain."
—Vincent van Gogh