October 23, 2015
It was 23 years ago today I premiered my first graphic novel, "The Illustrated Life & Times of Billy the Kid" at Suzanne Brown's Art Gallery in Oldtown Scottsdale, Arizona. 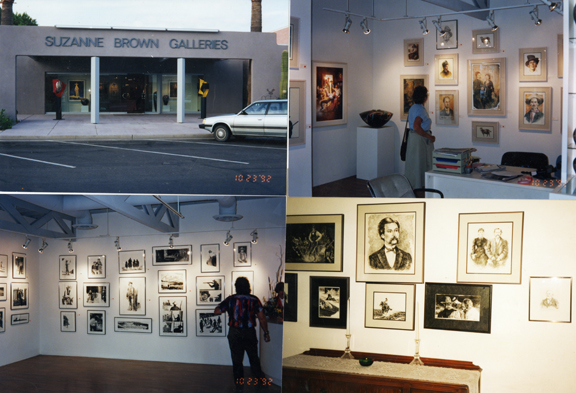 Thanks to my production assistant, Julie Sigwart, we got a big write up in the Arizona Republic (she was working for me at nights and for the Republic during the day. Or, was it the other way around?). Tri Star Printing actually delivered 200 books to the gallery at six o'clock, that's how tight the schedule was. Sold those in about a half hour. Had about 1,500 people, sold most of the artwork. In 1996 we came out with the second edition, which was heavily redone with new photos and illustrations and this is the one most people have today. There are still first editions floating around (I kept one box) and they go for a pretty penny.

Hard to believe we're approaching the quarter century mark on the art and the book. The gallery is gone as is Suzanne, but the legend of both lives on. I saw her take a painting that wasn't selling, move it to another wall, double the price and it would sell. Now THAT'S an art.

That was a long way back, and I have so far to go. Wonder what the old vaqueros have to say about this?

"Always concentrate on how far you've come, rather than how far you have left to go."
—Old Vaquero saying
Posted by Bob Boze Bell at 8:07 AM