Bring Me The Head of The Apache Kid

The Duke of Dust returns. Went home for lunch and took a stab at a half-finished study I found in the garage. 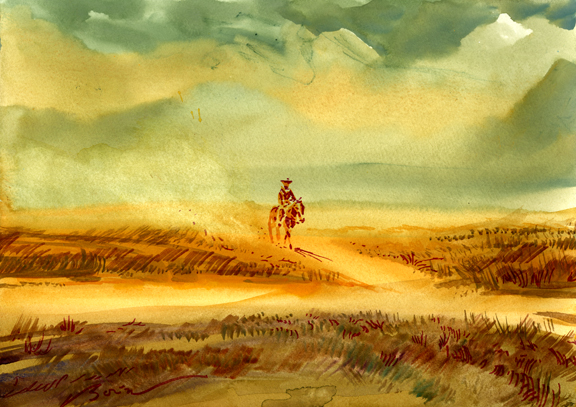 Daily Whip Out: "Dust Storm at The Crossroads"

I also finished another failure I found in the garage this morning before I came into work.

Daily Whip Out: "He Stood There In The Pass, Defiantly."

The dude standing in the pass is, of course, the Apache Kid. And it was his best friend, Mickey Free, who was given a harsh assignment by the brass at San Carlos: "Bring me the head of the Apache Kid." Mickey traveled to Mexico to track down his friend. Some believe Free found the Kid and completed his mission. Others, well, here is the ending of my movie:

Cut to: an aerial shot of the mighty Sierra Madres. The date appears on the screen—1937—and as we pan down we see a steep, serpentine trail and the small figure of Helge Ingstad, the Norwegian anthropologist, trudging upwards into the clouds. Beyond the ridge line, in the remote Mormon village of Garcia, he meets a middle-aged Apache woman named Lupe. After some small talk, Ingstad says, "When did your father die?" She gives that shy Apache smile and says in her native tongue, "Jelk mah-tae-thah, miet ta booty."

Ingstad looks at the interpreter, who says, "She says, 'He didn't die. He's still out there.'"

Cut to: aerial shot of the vast spires of the Sierra Madre and as the camera swings around we see the Apache Kid, standing defiantly on the ridge between four mighty peaks. He's waving his Winchester towards the heavens. Camera keeps circling, then goes up into the sky as credits roll, and Beck's "My Farewell Ride" plays on the soundtrack.

"My father was a scout for the American soldiers at San Carlos, but was arrested and then killed two men. After that he fled into the Sierra Madre. He was a great warrior."
—Lupe, the daughter of The Apache Kid, as quoted by Helge Ingstad, a Norwegian anthropologist who interviewed her in 1937 at Garcia, Mexico. From Paul Hutton's new book, "The Apache Wars."
Posted by Bob Boze Bell at 4:40 PM