March 25, 2016
This is what you get when you listen to ZZ Top while painting, at night. 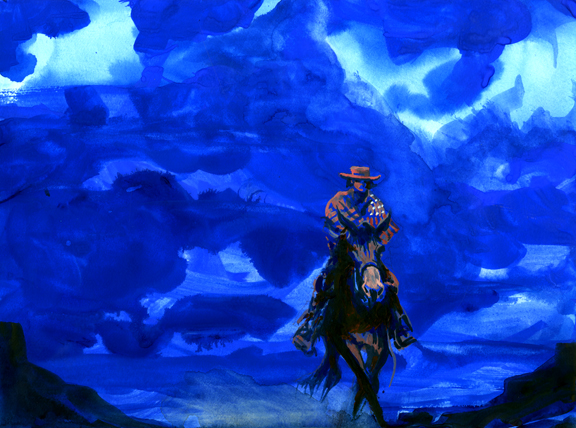 Daily Whip Out: "Mickey Heads Up A Slot Canyon In The Moonlight On His Trusty Mule Tu, Just Before The Mammoth Jack Refused to Go Another Inch Up The Trail"

Mick calls his mule "Tu" which is Spanish for "You." Meanwhile, while listening to "Gotsta Get Paid," also by ZZ Top, I found this little smirk expressing itself:

"That damn mule saved your bacon that day."
—Fiero Martinez, of the Doroteo Arrango gang, admitting to Mickey that they were intent on ambushing Free, but his stubborn mule wouldn't go all the way into the canyon. Mickey finally realized Tu actually sensed the bad intentions emanating from the pass and saved his life.