Frankly, My Dear, I don't Give A Continental

March 8, 2016
Great feature in The Hollywood Reporter about "Hollywood's 100 Favorite Movie Lines," and how the classic line "Frankly, my dear, I don't give a damn," from Gone With The Wind almost didn't make the final cut. The studio was very nervous about using such a strong swear word—"damn"—and apparently asked the writer to come up with 20 alternatives. Here are my favorite three (in terms of  crazy/funny/awfulness):

"Frankly, my dear, it makes my gorge rise."

"Frankly, my dear, I don't give a Continental."

"Frankly, my dear, the whole thing is a stench in my nostrils."

Just goes to show, how hard it is to be bold, in the face of caution. The decision to run "damn" seems easy in retrospect (and, by extension, it seems, to our ears, harmless and self-evident), but at the time it was very, very bold and scary for the creators. This is the kind of decisions we all face daily. Wish I could say I was bolder than I really am, but I'm not. 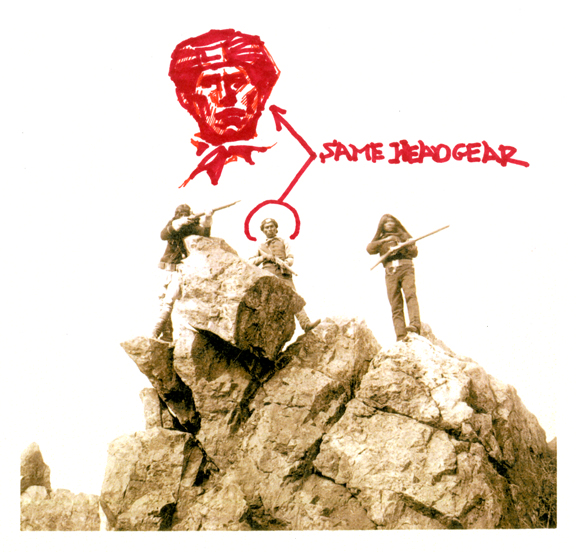 We are doing a cover story on The Apache Kid and we are using a photo of the Kid which is somewhat contentious, or more accurately questionable. It's a cool photo and the Kid has a unique headband. We were looking for other Apache photos yesterday and I ran across this one and noticed that the middle scout is wearing the same exact headband. I asked the Top Secret Writer about it and this is his response:

"Yes that is the same fellow but without the jacket. He is in another Fly photo standing by some rocks with soldiers. All these were taken by Fly at the Crook/Geronimo surrender meeting. Mrs. Fly later did the ID on Kid as the Apache Kid in the little book she published of the photos (she also said Massai was in the trio photo). It looks more like Kid in the other two photos than in the trio photo. But its the same Apache scout. Is it really him? Beats me."

"Do you suffer when you write? I don't at all. I suffer like mad when I don't write, or just before, and feel empty. But never feel as good as while writing."
-—Ernest Hemingway