May 23, 2017
I was talking to my son-in-law, Mike, about dirt track racing last weekend in Seattle, which he knows a thing or two about. Back in the day (1970s) I dabbled in TT Racing when Motocross was just coming to the states. I was a "novice" and never won anything although I did get a trophy from Eastside Cycle Park in Tucson in about 1969. Mike and I talked about the metal shoe they wear on their left foot to facilitate the wide turns in dirt track racing, where they get going sideways, bigtime.

There's just something cool about those powerful machines trying to outrun the front wheel and those daredevil riders staying with it.

Got home Sunday and Googled flat track racers and got some doozy reference. Went home for lunch today and did this study (sans shoe): 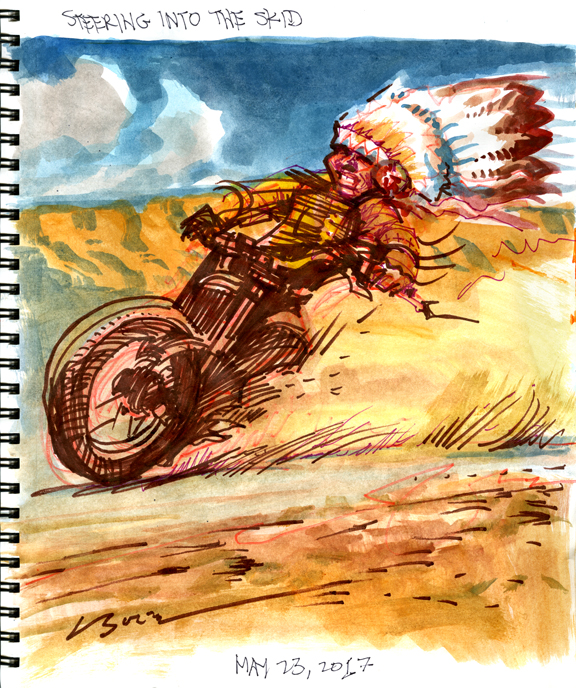 Daily Whip Out: "An In-din On An Indian Steering Into the Skid."

Oh, and one more thing: I want that In-din smiling and enjoying himself.

"He who cannot rest, cannot work; he who cannot let go, cannot hold on; he who cannot find footing, cannot go into a turn going sideways into the skid."
—Old Vaquero Saying
Posted by Bob Boze Bell at 3:24 PM