May 15, 2017
Spent the weekend revisiting a painting idea I want to do up right. Did a couple more roughs for an ambitious sweep of a scene. I was inspired by my back country cruise on the Buck & Doe Road (61 miles of dirt road) between the Diamond Bar and Peach Springs, Arizona, last month. 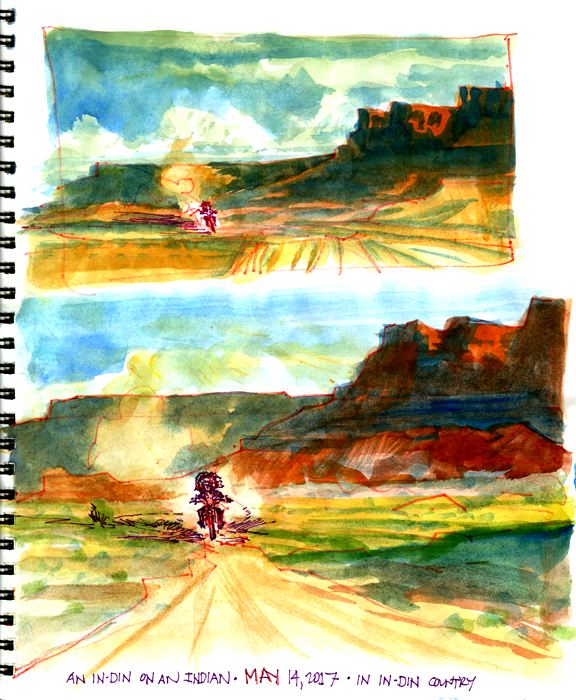 Daily Whip Out Studies: "An In-din On An Indian In In-din Country, Part I and II" Daily Whip Out Studies: "An In-din On An Indian In In-din Country, Part III"

I may do a couple different versions of this, including a side view of an In-din rippin' down a dirt road, kickin' up a rooster tail with a full war bonnet flappin' in the breeze.

This morning, I read with some interest, Adam Gopnik's thoughtful piece in the latest issue of The New Yorker: "We Could All Have Been Canadians: Rethinking the American Revolution." The essence of the piece is that "America was essentially a Third World country that became the battlefield for two First World Powers." That would be England and France and from there Gopnik draws, ahem, on how the battle of ideas was advanced by my tribe: it is, he writes, "astonishing how often the political figures of the time, from Benjamin Franklin to Paul Revere, communicated in comic images." In other words, their cause—actually OUR cause—was advanced to a great extent through political cartoons! Wow! Those are my peeps.

But the item I want to mention is that the Canadians have come to call their In-dins,"First Nations," which I rather like.

"The Canadian experience was not free of sin—as the indefensible treatment of the First Nations demonstrates—and was, as well, not free of the 'colonial cringe' that bedevils so many countries over attached to the motherland."
—Adam Gopnik