May 13, 2017
I don't know if it's because I'm Norwegian or if it's because I'm from Kingman, but I have always hated Needles, California. I'm not alone. Growing up in Kingman, most of my friends hated Needles as well. Charlie Waters always liked to say it is "the armpit of America." Other friends compared it to lower extremities. Of course, it didn't help that when we were in high school Needle's teams humiliated us in all four major sports (football, basketball, baseball and track) and the Needles kids had a reputation—at least to us—for being really wicked, you know, in a loose, Lutheran kind of way.

Imagine my shock, when I met a former Needles High alum at the U of A and he confessed to me he and his friends always thought Kingman girls were the most wicked!

I guess the ass is always greener.

Anyway, I have found myself obsessed with the damn place for the past couple months because when Olive Oatman was a captive of the Mojaves, she spent four years parked right on the future site of the town of Needles, California. That is just crazy, ironic. 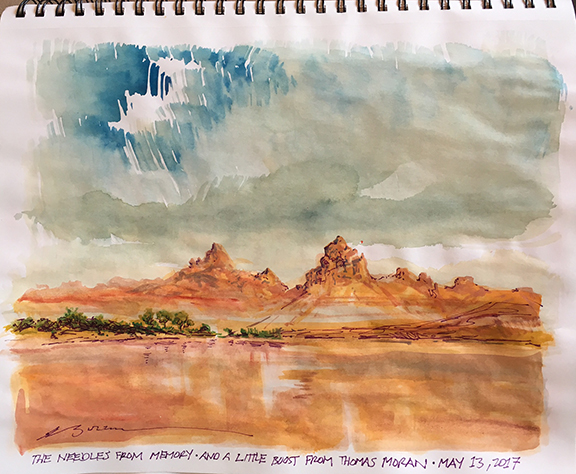 Daily Whip Out: "The Needles From Memory And A Little Boost From Thomas Moran"

In two weeks, I'm traveling to Bishop, California to be the grand marshal in the Bishop Mule Days parade, and—I thought I would never live to say this—but I am rerouting my trip so I can go through Needles. I intend to spend some quality time there, researching and painting the area.

"My ancestors were Puritans from England. They arrived here in 1648 in the hope of finding greater restrictions than were permissible under English law at that time."
—Garrison Keillor, major Norwegian and Lutheran
Posted by Bob Boze Bell at 3:46 PM