May 29, 2017
Ken and I had a great time in Bishop at the annual Mule Days celebration, but on Sunday morning we decided to fold our tent and head for home. It's a ten-hour-run from Bishop, California to Cave Creek, Arizona and we got on the road by 6:30. Ken did the heavy lifting since he had to drive his gigantic Mo Ho RV rig the entire route. 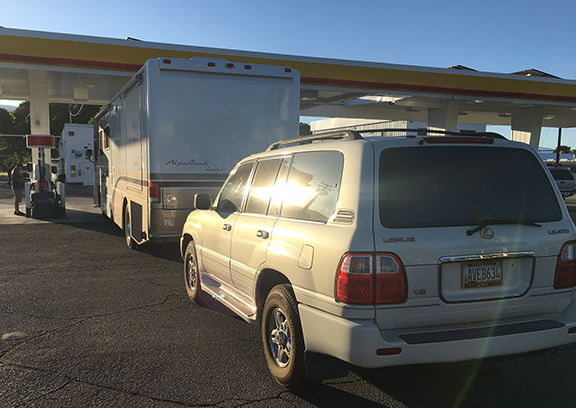 
I was the navigator. Kathy likes to brag that I have a superior nose for directions. I also have a road motto: direction wins. When in doubt, go in the direction of your destination.

This logic went straight to hell yesterday. Here's what happened. 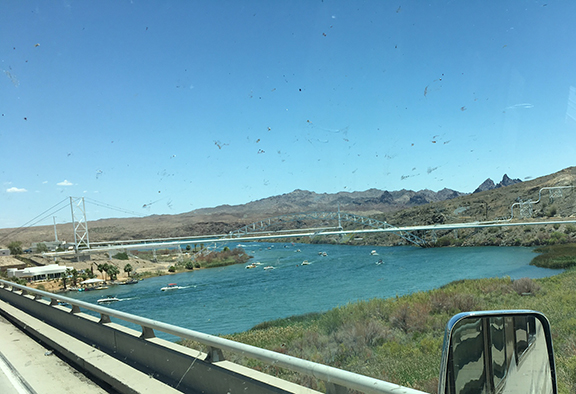 Crossing the Colorado River at Topock

After a five-hour-run from Bishop to Needles, we crossed the border into Arizona at Topock, then got gas at a Love's Truck Stop at the intersection of I-40 and the Lake Havasu turnoff. My nose told me we needed to turn south and go in the direction of Parker and on to Wickenburg, but the GPS Google map app on my phone claimed if we went north to Kingman and around to Wickenburg it would be 26 minutes faster. The compass in my nose said, "This is ridiculous!" Why? Because it's the wrong direction! My damn phone is telling me to go in the wrong direction for 100 miles (50 miles north to Kingman, then 13 miles east, then 50 miles south to Wikiup where we will basically get back to even), and you're telling me, it is 26 minutes faster? That is just wrong, wrong, wrong.

Ken overruled my route because he opted for the smoother route (I-40) for his RV, so we headed for my hometown, with my nose out-of-joint the entire way.

I assume the shorter time has to do with the stop and go driving through the town of Lake Havasu and then the twisty, slow drive down through the Parker Dam river canyon, but it still seems very weird to me to go halfway across Mohave County in the wrong direction, to get to Wickenburg, and arrive a half hour earlier.

The good news is, I got to see the country Lieutenant Amiel Weeks Whipple explored in 1853-54 and match up the terrain with his report. For example:

January 27, 1854
Leaving the east end of Mount Aquarius we travelled eight miles northwest, to the other extremity of the same range, crossing numerous spurs that formed rivulets tributary to Bill William's fork. . .fresh tracks of Indians and of horses were seen upon the borders of the creek.

January 28, 1854
At 2 P.M. we reached the point where White Cliff creek emerged from the hills, and found ourselves entering a wide valley, bounded on the west by a range of mountains before seen from Aztex Pass, and named Blue Ridge. [I believe he is referring here to the Hualapai Mountains)
The stream, turning southerly, appeared a short distance below to join a wide arroyo from the north, called Big Sandy.
A short distance beyond Indians were seen upon the hills. Five were counted. They would not come to us, nor allow themselves to be approached.

January 29, 1854
While at breakfast an Indian whoop was heard, and turning towards the hills, we saw two tawny figures looking down upon us. A couple Mexicans were sent out to parlay and bring them into camp. Our ambassadors bore a white towel pinned to a ramrod, as a flag of truce, but evidently placed less faith in this token than in the pistols which they endeavored to conceal beneath their coats. After a series of gesticulations and signs, one of the Indians took a firebrand from behind a bush where it had been concealed, and produced a little column of smoke as a signal of peace. Slowly and cautiously the Mexicans continued to approach, and were at length received by one of the savages with great dignity. The other seemed facetious. Without ceremony he converted the towel into a breech-cloth, and transferred the ambassador's hat to his own head. We saw from their continued vehement gestures that they were not likely to come to camp, so Leroux (a seasoned scout) and myself went to them. The Indians greeted us by placing their hands upon their breasts; and saying "Hanna." "Hanna" invited us to be seated by the fire which they had kindled. By signs they told how they had watched and followed us, fearing to approach camp lest we should kill them. They examined Leroux pretty closely, and then pointing towards the northeast, indicated that they had seen him before in that direction. The accused blushed, but stoutly denied the fact; at the same time pulling his hat over one side of his head to conceal a wound they had given him two years go.

End of diary entries. Here's the amazing back story to this diary entry. While guiding the Sitgreaves expedition in 1851, the scout Antoine Leroux ascended a ridge in the same neighborhood to get a look at the country ahead, when several Indians, probably Hualapais, jumped up and at point-blank-range sent a "flight of arrows" at him. Three of the arrows "took effect" in his body, one going through his wrist and another "striking him on the left side of the head behind the ear, after cutting a groove in the occipital and temporal bone, broke in numerous pieces," which the expedition doctor S.W. Woodhouse removed, but the good doctor had a harder time with the wrist wound, reporting, "the other entered the forearm near the wrist joint; the head was firmly imbedded in the radius." Leroux suffered for most of the remaining journey to the Colorado River and then down to Fort Yuma—which was abandoned before they got there!—so, consequently, they all had to walk to San Diego! And here he is, two years later, in the same country and he runs into the Indians who attacked him the last time. And they essentially say, "Hey, didn't we try to kill you a couple years ago back there over that ridge?"

Like I always say, you can't make up anything crazier than real life.

So, on our long, wrong-way journey yesterday we drove right by this encounter as we traversed the Big Sandy down to the Santa Maria, which is where the Whipple expedition turned west to the Colorado River.

And what happened next is even crazier.

"A historian is a prophet in reverse."
—Friedrich Von Schlegel