On The Road to Past Predictions

May 26, 2017
On the road to Bishop, California for the Mule Days parade. My wild man partner, Ken Amorosano, decided to come along and insisted on bringing his RV and his car. Here we are yesterday morning at six, ready to hit the trail. 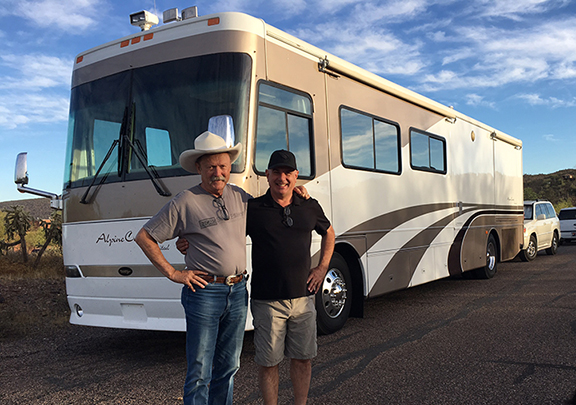 BBB, Ken Amorosano and The Mighty Moho (38 feet, plus the Lexus=50 feet)

We were headed for Earp, California to film two segments for a documentary we are working on. First stop was along the Colorado River. According to local lore, Wyatt Earp liked to walk across the railroad trestle bridge in the background to eat rhubarb pie at a cafe in Parker, Arizona. Earp preferred the California side of the river because he still had a murder warrant out on him for the killing of Frank Stillwell in March of 1882. 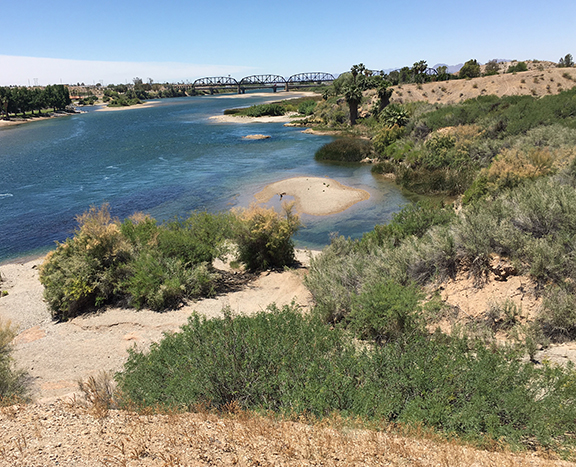 The Colorado River from Earp, California, looking back at the railroad bridge to Parker, AZ.

I told Ken I wanted to do a drone shot flying over Wyatt Earp's campsite and the crazy guy went out and got a drone pilot's license and bought one. It ain't easy and, in fact, we had to clear the flight over the river with the FAA because it's near the Parker airport. 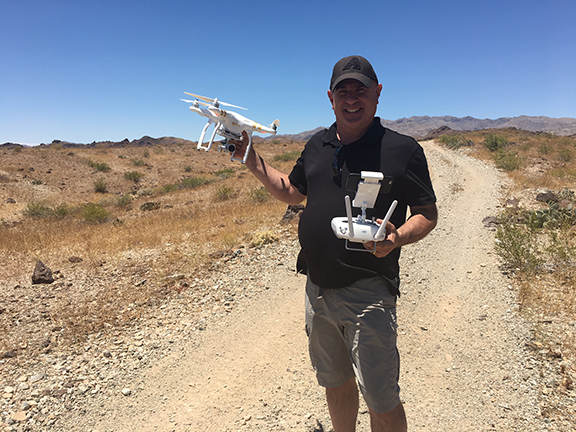 This was taken out at the Wyatt Earp campsite near his Happy Day Mine. I visited here on October 14, 1995 and it was the most pristine Old West site I had ever visited. There were still nails in the tree where Wyatt and Josie set up camp and you would have sworn he just left.

I remembered I had written down specific directions to the camp in my Franklin Daytimer where I kept copious notes. The site is up a wash about 6 miles west of the Earp post office and unless you know where to turn it is very hard to find.

So, on Wednesday, I went upstairs in my studio morgue and pulled out the binder with 1995 on it Not only were the map directions there but I saw many other notes about my efforts to complete my revised Billy the Kid book which I was working on at the time. Here are a couple entries:

September 19, 1995
Gave Tommy another drum lesson (we've set up the rum in the breezeway). Another generation of neighbors moans into the night.

September 20, 1995
I've got hemorrhoids. I imagine it's because of stress from the Chris deal (Billy book).

October 23, 1995
I don't know how much more discouraged I can get. I owe everybody. Pam Eckert  (the framer for my failed art show) called yesterday crying. She absolutely needs her money. I called Betty Radina and asked if I could borrow $2,300. She said yes. I sure owe her.

October 24, 1995
I'm in a big hole. A fucking Grand Canyon hole. Crashed yesterday morning. I have no energy. I'm worried about my health. My stomach is in constant low grade pain. Ulcers or cancer..

Turns out it was a hyper-active thyroid and it took a year-and-a-half to cure (or, at least go into remission). The second edition of Billy was finally published at 192 pages and here's what my son Tommy found out about it on Goodreads:

Your Illustrated Life and Times books however are CRUSHING it in the ratings.

That's a ridiculously high rating. I've read Graham Greene books that I loved and were rated around 3.6. Just saying.

December 22, 1995
"Stayed up reading Time and Newsweek until 10:30. Fascinating article on the Internet. It's coming real fast and I need to get on. I have a hunch I will do well on line."