The Charge of The 21 Vaqueros

May 9, 2017
Went home for lunch to work on a lead illustration for the June Classic Gunfights. It involves 21 armed vaqueros tracking Apaches who had killed one of their beeves in the northern part of Sonora, Mexico. What they perhaps didn't know is they were going up against a dead shot Apache armed with a single-shot Springield rifle. Oh, and he was known in that neck of the woods as Jeronimo (the Spanish saint is San Jeronimo, who the G-Man was nicknamed after, when Mexican soldiers cried out to San Jeronimo to protect them every time the Apache warrior leapt over barricades to single-handedly kill them.) 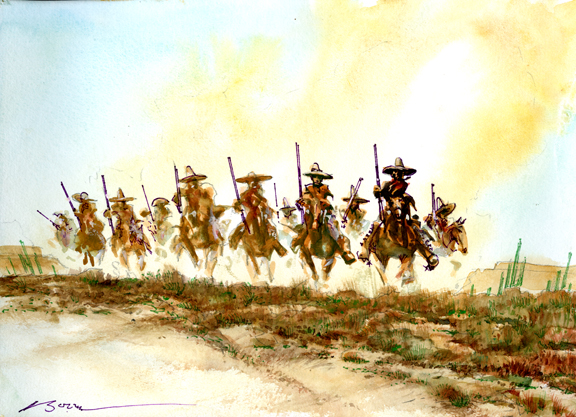 Daily Whip Out: "The Charge of the 21 Vaqueros"

Had a very ambitious version of this scene going—with excellent photo reference—which I worked on most of the weekend, but I finally gave up on it, late Sunday afternoon. 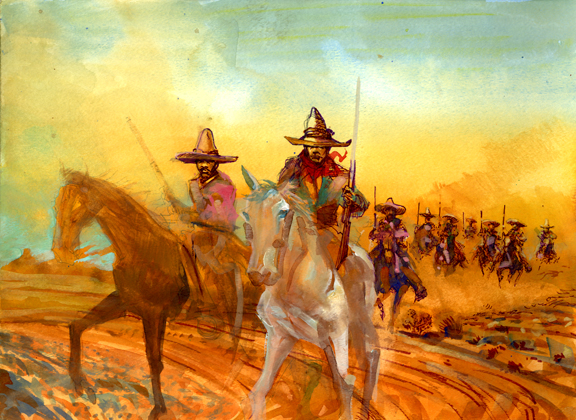 Sometimes having good art reference can be a curse rather than a blessing. It's painful to let this one go, but then so is working a good scene to death. Hopefully I learned something from the experience, but as Archibald says, even learning can be painful.