The True History of Honkytonk Sue

February 3, 2018
Sometimes I forget just how far back I go in the annals of Zane. Back in 1977 I had a brief flirtation with National Lampoon.

I was living in Tucson and the Arizona Daily Wildcat (the school newspaper at the U of A) did a short feature on the Razz Revue, a humor magazine—I'm sorry, it was a MAGAZOMIC!—that my friend Dan Harshberger and I created and launched in 1972. By the spring of '77, it was all but out of business.

Not long after the Wildcat article appeared, I got a letter from Matty Simmons, the publisher of National Lampoon, stating that he thought there were perhaps staffers at the Razz who might be good enough to work for the NatLampCo (slang for the National Lampoon Company).

I spent a good week developing Lampoon inspired cartoon ideas (Neutron Man! He destroys people but leaves the buildings!) and at the last second, before I dropped the rough sketches in the mailbox, I thought I'd better cover the dog, as we used to say, and, even though I knew they would never choose it, I included a rough sketch of the first thing that came into my mind: 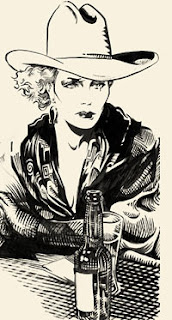 The newly installed editor at the Lampoon, Tony Hendra, asked for six pages and in the summer of 1977, my cartoon creation Honkytonk Sue appeared on the pages of the National Lampoon.

From there it was all down hill. Tony Hendra flew out to Arizona to meet the staff and we all ended up at Dan and Darlene's house on Cheery Lynn in Phoenix. It was clear he was looking to hire someone. Long story short, I didn't get the gig at Lampoon.

There is a new movie out that features the story of the creation of The National Lampoon and what became of the guys who founded it. Without a doubt,  the film is one of the worst movies I have ever seen. Bad wigs, unfunny dialogue and a boring, pointless story. One thing they got right though, is the title:

Tony Hendra is in the story, as is Matty Simmons, but the closest thing to an Arizona connection in the movie is the infamous Minnie Mouse cover (showing her topless) that brought down the wrath of Disney's lawyers, who threatened to sue the magazine for $34 million. The cover was created by Sagebrush Studios, which included Arizona natives, Ed Mell and Skip Andrews, who were living in New York at the time. That scene made me smile, but it did not make up for the drivel that came before and after.

Honkytonk Sue had another incarnation and a shot at the big-time, but I won't go into that here. For an excellent overview of the comic books that followed, read this:

An underground review of The Queen of Country Swing


"Change is the business of satire. Satire is militant irony. Irony is long-suffering. It doesn't incite you to transform society; it strengthens you to tolerate it."
—Martin Amis
Posted by Bob Boze Bell at 8:24 AM