February 7, 2018
The tour continues, as we take a closer look at some of our classmates from the True West Class of 2018: 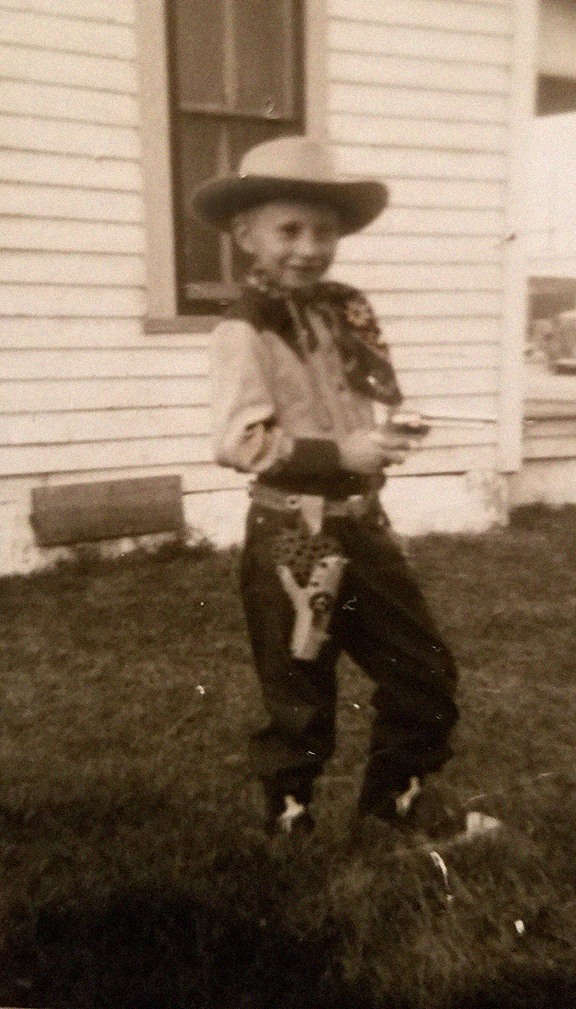 GARY ROBERTS: "This is circa  1949-1951,  in Tifton, Georgia.  True West magazine wasn't sold in this part of the country, and I was scrambling to find things to read about the West.  I was also writing letters like crazy to everyone I heard of who wrote about the West.  I can't remember exactly how I learned about True West, but I think I found an ad in another magazine.  I first subscribed in the summer of 1957.  I submitted my first article to True West in 1960, my senior year in high school.  It was published in the January-February 1961 issue.  By then I was a corresponding member of a half dozen Westerners corrals and posses and keeping the post office in business with letters ( to everybody from J. Frank Dobie to Zoe Tilghman) and book orders--Frontier Book Company,  W. M. Morrison Books, Guidon Books, etc.  It was quite a time!  I wish I could regenerate that energy and passion today.  Every trip to the mailbox was an adventure." Gary is perhaps the foremost expert on Doc Holliday and his seminal book, "Doc Holliday: The Life And Legend" is considered the best, in depth look at the deadly dentist.

GARY ZABOLY: February 1957---at age 7. Taken in Highbridge Park, upper Manhattan, and while not in cowboy attire I assure you, as you can see by the stance, my mind was full of cowboy hero/gunslinger thoughts. My interest in the Old West began when I saw B Westerns on TV around age 3, which were constantly being broadcasted then. They inspired me to draw stories on index cards, each card a scene. Rocky Allan Lane became my favorite B Westerner. I knew of True West magazine from an article in another magazine, and I wrote to them in 1962 seeking info on a subscription. I will never forget the name of the dear kind lady there---Gayle Terbay---who unexpectedly sent me a nice note and two free issues, one of TW, the other of FRONTIER TIMES, and I was ecstatic. The artwork bowled me over! I immediately subscribed, and naturally I still have all those old issues, and many more back issues I began buying back then." Gary is a prolific artist and has been featured in True West probably more than any other artist.

Frederick Nolan, age 3 (dog even younger), circa 1934: "First thing first — the dog's name was Tony and he was my rich aunt Alice's dog. She lived in the posh suburb of Liverpool. When I was 19 I suffered an injury and was laid up for a long while and I began to read. I found a reissue of Walter Noble Burns book, 'The Saga of Billy the Kid' and I became fascinated by the story." Boy Howdy.  At that time nobody knew much about John Tunstall. In fact, we didn't even know his middle name. Fred not only located the birth certificate of John Henry Tunstall, but he found and spoke to Tunstall's 82-year-old sister Mabel. Fred then went on to write the definitive book on Tunstall, filling in many gaps in the story. And he has since written numerous books on the Lincoln County War and Billy the Kid. He is considered one of the foremost authorities on the life and times of Billy the Kid. His work has appeared in True West many times and he continues to enthrall and amaze all of us. He lives, with his wonderful wife Heidi, in Chalfont St. Giles, England and when he visits the colonies, we all rock out!

October 17, 2012  Last Saturday I had a talk in a cowboy tent out on the paddock of the Ruidoso Downs. This was for the Lincoln County Cowboy Symposium and it was standing room only. I had an ace up my sleeve as I teased the audience about a certain gentleman scholar from England who gave us so much when he found the Tunstall family in London back in the 1950s and unearthed John Henry Tunstall's diary among other treasures. This was a major breakthrough in Lincoln County War scholarship and when I started on my journey to discover the truth about Billy the Kid, back in 1991, Mr. Nolan was one of the icons on the mountaintop I just had to meet.   "If only he were here today," I teased the audience, "we could ask him the questions we all are dying to ask someone of his stature." About half way in to my talk I stopped, turned to the right side of the audience and said, "Well, what do you know, Mr. Nolan is sitting right there in the third row." The audience gasped as I invited him up on the stage. To say we killed is an understatement. In addition to being the foremost expert on the Lincoln County War AND Billy the Kid, Fred is quite a performer. We had a great time.

Here we all are at a dinner in Fred's honor. Left to right, moving around the table at The Cattle Baron's Restaurant in Ruidoso: Patty VanDerGang of the Westerns Channel, Doreen Daiss, Heidi Nolan, Dave Daiss, BBB, Fred Nolan, Morgan Nelson (93), Sue Lambert and Jeff Hildebrandt of Encore Westerns Channel.
"I'm Bob Boze Bell and this has been a True West Moment."
—BBB sign off on the Westerns Channel, 2002-2012