May 5, 2019
Yesterday, I got up at five and hit the road for Seligman. It's a 157 mile run to the Sno-Cap Drive-In and I had a delightful early morning ride up through Dewey-Humbolt, Prescott Valley, Chino Valley and on through Ashfork, Marshal Trimble's hometown.

Pulled into Seligman a little after eight and had breakfast at the Road Kill Cafe, then walked down the main drag to take a gander at all the rides. 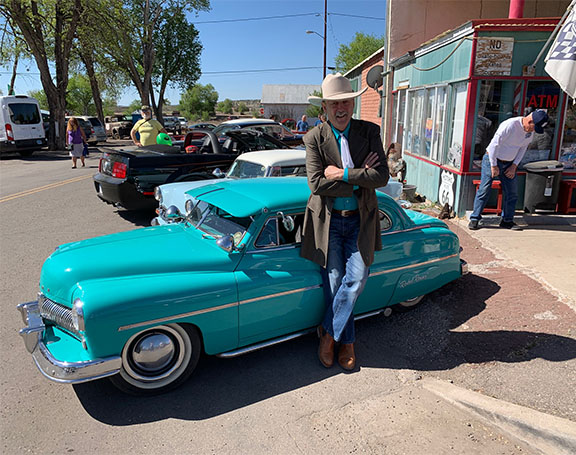 When the car matches your shirt, wear the car.

So, back to the cafe: I've always got my reticular activating system turned on. The Road Kill Cafe was packed and the hostess informed me I could eat in the bar. Four random guys joined me at the long T-boned island bar and while one of them was in the bathroom, and to be sociable, I asked where they were all from. Two were from Prescott, one from the Valley and the fourth guy points at the empty stool and says, "He's from Humboldt." Well, I'll be a monkey's uncle, I thought to myself, I am dying to know where the train depot was for Dewey-Humboldt because I learned two weeks ago that Sharlot Hall would have caught the train there on her way to Pasadena. 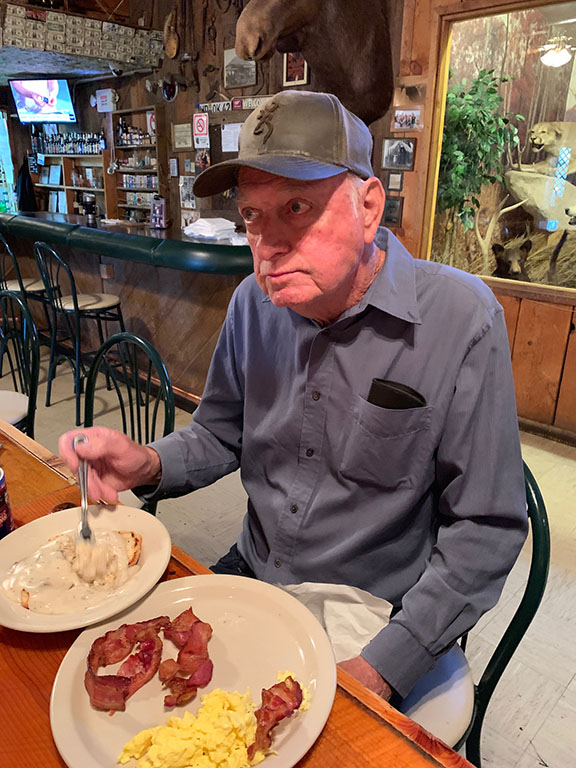 Not only did Harold tell me where the train depot was (just down the hill from the old part of town), he told me his family owned the gas station where "Junior Bonner" was filmed (the opening scene where Steve McQueen is gassing up on his ride to Prescott). Small world, eh?

And some people have the nerve to wonder why I love these disappearing hometown cafes.

Out on the street I noticed a couple of things. The cars are getting newer and the guys are getting older. When my dad and I first did the Fun Run, back in the eighties, there were a couple contingencies of Model Ts, but those cars and the guys who loved them have long since passed. I don't want to say everyone had a walker yesterday, but I will say the tottering has begun. 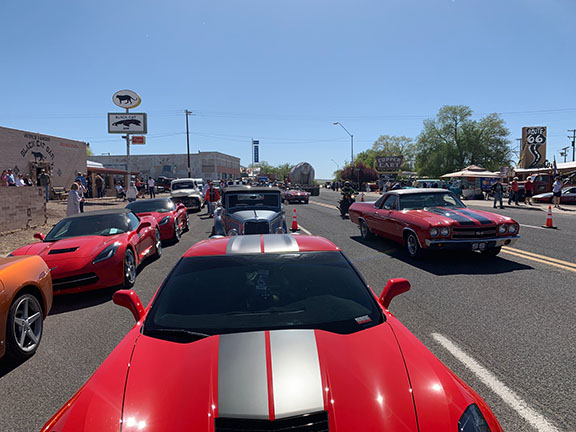 Muscle cars in front of the Black Cat Bar

While fifties and sixties rock music still saturates the curbside spaces I did hear the first stereo blast of Hip Hop cruising by in a jacked-up F-250 full of "kids" in their late twenties.

Ah, the changing of the guard, even in the camp of the gear heads.

But the real treat of the trip was meeting up with this guy. 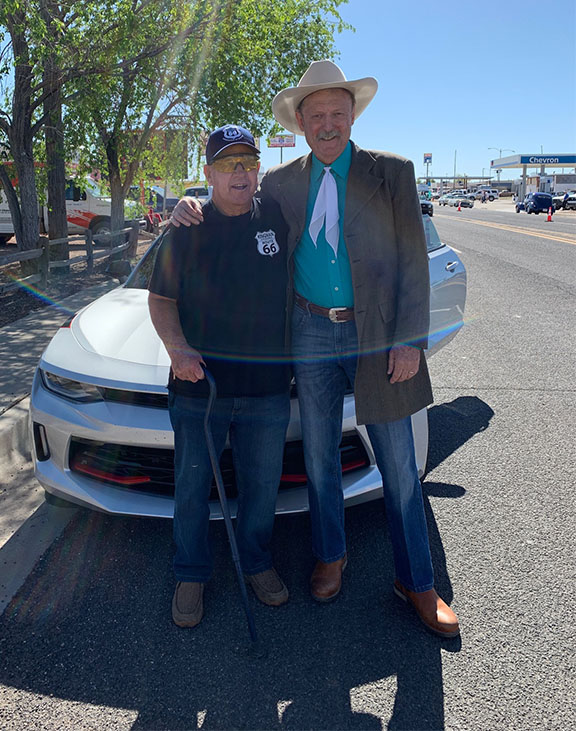 The Lord of Hackberry Fred Grigg

Fred and I go back to Kingman Junior High School, where I got swats—for defending Billy the Kid—but he defied the same teacher, Mr. Lomasney, who tried to intimidate Fred, who had his feet up on his desk in full-blown James Dean fashion, and Mister Lomasney backed down! Fred has been my hero ever since.

Fred had a stroke three years ago and although it has slowed him down, he still commands respect throughout Mohave County. For one thing he owns most of Hackberry, where he grew up and lives to this day. Yesterday, I told Fred I have been through Hackberry a thousand times, but I have never stopped to pay respect to my great grandmother who is buried in the local cemetery. Thanks to Fred—who owns the cemetery!—I finally got to do that. 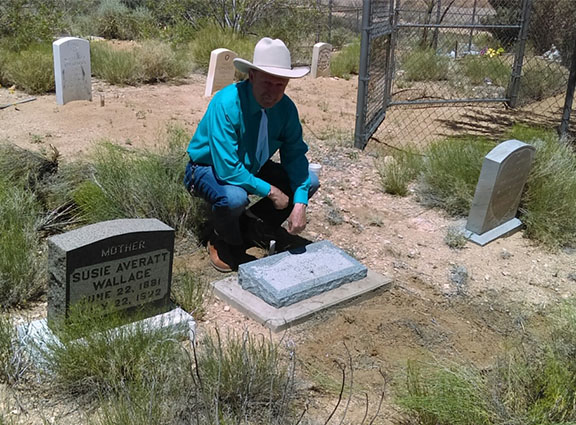 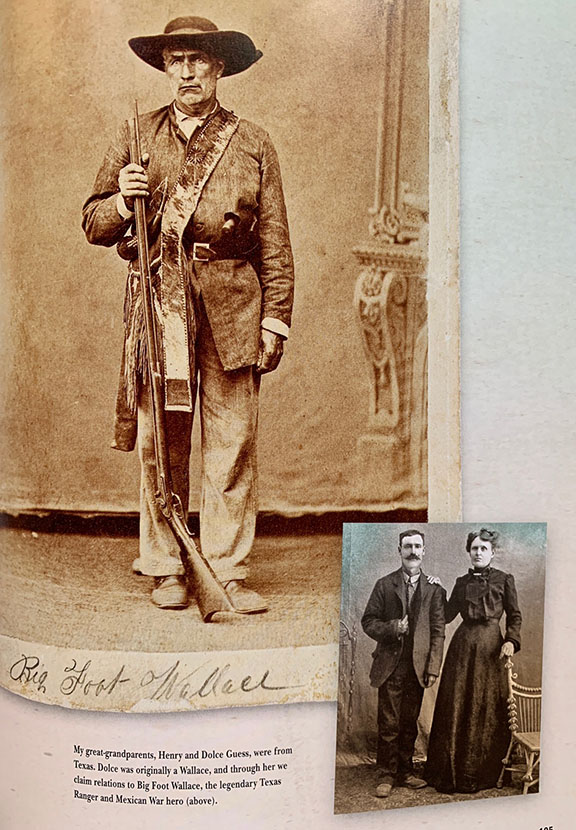 Dolce was a Wallace and that is where my family lays claim to being related to the legendary Texan, Big Foot Wallace.

From Hackberry, Fred joined me and we drove to Kingman together, telling windies the entire way (Fred pointing out at a wash draining into Red Lake: "I tried to cross that wash on horseback and it was ripping so fast, it took me and the horse all the way down here. I couldn't swim, so I was lucky to live through that one. The horse was cut up, we went through a barb wire fence, but he lived as well.") 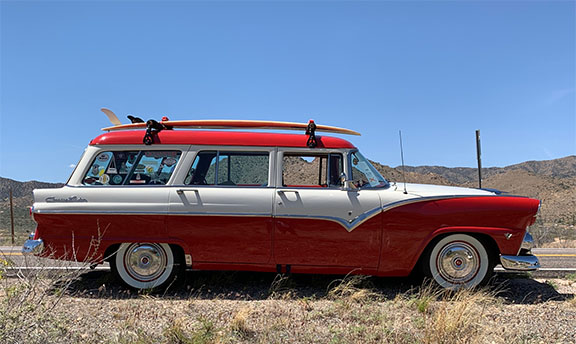 A Cherry '55 Ford Station Wagon
Doubling as A Woody

"The road is the only thing."
—My favorite reply to the question: "What is more satisfying, the road to success, or arriving at success?"