May 6, 2019
Home stretch on the Kid issue. Took another swing at the big-doubletruck-splash-page painting, tightening up some of the figures and adding detail to the torreon. 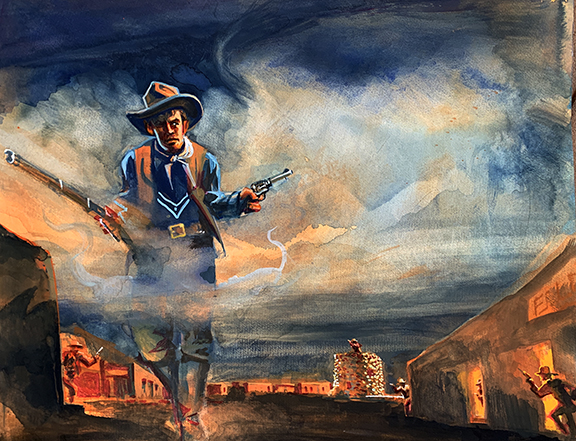 "Billy the Kid Walks
The Most Dangerous Street In America"

Dan The Man has been working on the cover and here are his latest versions:

I definitely like the rifle butt coming in front of the type. Really pops it off the cover. Of course, not everyone is on board with these:

"I'll gladly pay the $5.99 just to take the image home and shred it. Also, there is a reason red says danger on the traffic signal. All the rest of your cover boys look like New Jersey ribbon clerks setting out on the first Arizona elk hunts. In the Old USMC we called them 'feather merchants.' Doomed to get skunked."
—Don Dedera

I believe the esteemed Mister Dedera was referring to another batch of Billys posted on this site (the above is actually in the form of a letter SENT THROUGH THE U.S. MAIL!). In addition to the snippy comments, Don took the time to send a raft of clippings on, what he calls my "favorite love child." And then he adds, "Please, please, do not return." Here, for your edification, and mine, are a couple high spots in the old newspaper clippings:

"The telegraph and press of Arizona do not report one-tenth part of the deviltry of the white outlaws, and then only in an excusatory, cowardly and trifling manner. They rather take pride in recording the deeds of Curly Bill, Billy the Kid, and that sort of human wild beasts at large.
"That this is a direct falsehood, no one should know better than the Stock Report. If it knows anything at all about associated press dispatch reporters, it must be well aware that nothing looses by passing through their hand:—except truth. But that the local press of Arizona takes pride in recording deeds of outlawry, puts the cap sheaf upon this elaborately wrought stock of lies."
—The Arizona Sentinel, September 3, 1881

"Pat Garrett, sheriff of Dona Ana County, New Mexico was in Yuma yesterday on private business. . .Mr. Garrett expressed himself as highly please with Yuma and its future, especially was he delighted with the pure and invigorating atmosphere. The distinguished officer left last evening for his home at Las Cruces."
—The Arizona Sentinel, March 28, 1900

When I published the revised edition of "The Illustrated Life & Times of Billy the Kid" back in 1996, I noted that the notorious outlaw leader John Kinney "served three years in Lansing, then moved to Prescott, Arizona to live with a daughter. He died there on August 25, 1919. His obituary is more fantasy than eulogy."

Well, thanks to Don Dedera, here is that obituary:

"Captain John Kinney has gone into eternity with other border celebrities after a spectacular career of half a century as a citizen and soldier, filled with thrilling incident and experiences the like of which are fading into memory.
"His death occurred in this city yesterday morning about 4:30 o'clock after an illness of less than one month, due mainly to Bright's disease. He is among the last of the truly adventuresome pilgrims of the frontier to be called, and in the early days of his whirlwind life was known in the southwest as one of the most daring and courageous in the annals of men who were sacrificing and unflinching to preserve law and order.
"He entered New Mexico in 1868 a trooper of the Third U.S. Cavalry and his military service ended at Camp Bowie, Arizona, in 1873, a sergeant of Troop K.
"Then followed a civil career as an official which brought him into conspicuous rating in New Mexico when as a deputy sheriff and the chosen head of posses to run down criminals, he attained renown that still endures. His exploits in bandit fields are best known and shown by the five bullet wounds in his body and his sagacity in running down the notorious 'Billy the Kid' closed a criminal wave in New Mexico of death and destruction without parallel in border lawlessness.
"Captain Kinney stepped aside to give to Sheriff Pat Garrett of Lincoln County, this honor, but he kept in the saddle and performed other equally daring deeds to wipe out the large criminal element of the country, and in so doing attained the good will of the law-abiding."
—The Weekly Journal Miner, Prescott, Arizona, August 27, 1919

For some reason Prescott has always attracted old outlaws and old liars. 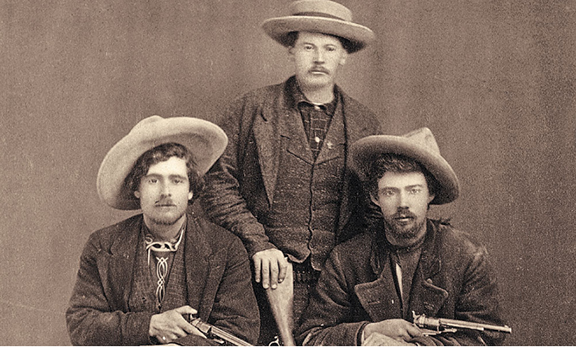 "Outlaws, like lovers, poets, and tubercular composers who cough blood onto piano keys, do their finest work in the slippery rays of the moon."
—Tom Robbins
Posted by Bob Boze Bell at 2:34 PM