September 4, 2019
For thirty years Geronimo and Chatto were great friends. They were from the same tribe, they both shared the same village with the great Mangas Coloradas. They both fought shoulder to shoulder in battles against Mexicans and Americans and they lived together on three different reservations. Some have speculated they even posed together using the same rifle and scarf. 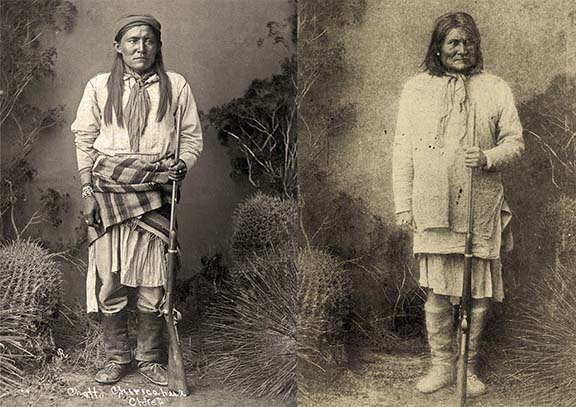 Chatto and Geronimo side by side

Historical Twins & Dopplegangers
Photographer A. Frank Randall is credited with taking these two photographs of Geronimo and Chatto on the San Carlos Reservation in 1884, after the Apache leader surrendered to Gen. George Crook in 1883.

Geronimo was 25 years Chatto's senior but the two got along famously until 1884 when Chatto decided to follow a new path. His wife (Is-chos), five-year-old daughter (Pe-des-dlin-je) and two-year-old son (Nagoka) were captured during an attack on Juh's camp in the Sierra Madres of Old Mexico. They were sent to prison in Chihuahua City. Chatto confided his predicament to Gen. Crook, who promised to do all in his power to get his family back. In return, Chatto became loyal to Crook and the Chiricahua's new agent, Lt. Britton Davis.

All of this history extends to my own family. My grandparents, on my mother's side, lived on a ranch in York, which is on the Gila River, near Duncan, Arizona. My good friend, Scott O'Connor, lived up river from us and he fills in the rest:

"Boze's family and mine have roots in Geronimo's old neighborhood. One cannot overestimate the fear he inspired among ranchers, miners and farmers along the Gila River Valley. Yet, as a kid I would yell 'Geronimo,' declaring my fearlessness when jumping off a cliff into Saguaro Lake. Time changes everything."
—Scott O'Connor, Sandra Day's son