The Apache Warrior Jason Betzinez on "I've Got A Secret"

I have heard for years that the Apache Jason Betzinez appeared on television in 1958 in conjunction with the publication of his book, "I Fought With Geronimo." Numerous, separate entries online state that he was on "What's My Line," but I skimmed the entire year—1958—of shows on YouTube and he is not there. So, last night, in desperation, I turned to my intrepid researcher to see if it could be confirmed, what show was he actually on, and, more importantly, is there surviving footage of the event?

Thanks to my intrepid researcher, Gay Mathis, I have found the actual footage of Betzinez on "I've Got A Secret" (the show was similar to "What's My Line") talking about his Geronimo days in 1958. I love how he pronounces his name and the word "Apache." Just so damn cool. He was 98 years old when this was filmed.

Jason Betzinez on "I've Got A Secret"


So thanks to Gay Mathis, I have avoided stepping in some serious doo doo, and not only that, but she has found a wonderful archival piece of history that gives even more depth to the story. 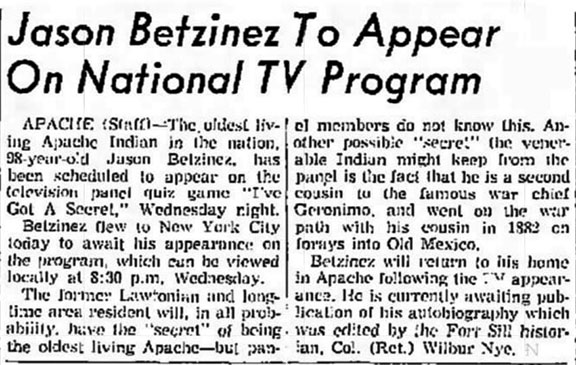 I cannot say enough about the abilities of Gay Mathis. I have never met her—we met online and communicate often but, so far, we have never met in person. She has saved my bacon so many times I owe her a car. Or, the equivalent to a car.

Also, it is thrilling to me that I was 12-years-old when this show aired and to think that a guy who was with Geronimo in the Sierra Madre, was alive when I was a kid is pretty damned exciting. So, now the copy will read:

He Fought With Geronimo!
Jason Betzinez graduated from Carlisle and became a tireless supporter for Apache rights. He wrote a wonderful book, "I Fought With Geronimo" and appeared on the television game show "I've Got A Secret" in 1958, where he almost stumped the panel. He died in 1960 at age 100! 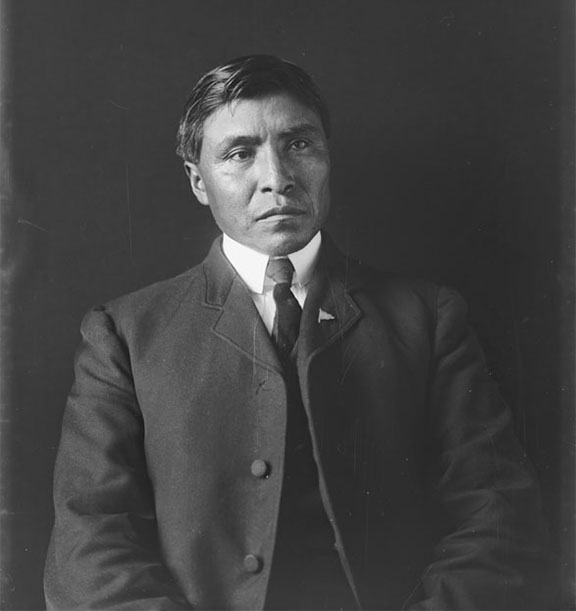 
"Wherever the crowd goes, run in the other direction."
—Charles Bukowski