September 16, 2019
Worked on artwork for the Geronimo book all weekend. Filling in sidebar art holes like this:


Once Geronimo was at a water hole in Mexico getting a drink with several other Apache warriors when a pursuing Mexican soldier got close enough to fire off a shot, which hit Geronimo in a glancing blow to the face, toppling him forward into the mud. With the rifle report, the Apaches with him fled and the swarming Mexican troops ran by Geronimo, assuming he was deader than a doornail.


Several minutes later, Geronimo regained consciousness and ran off. Another time, once again against Mexican troops, Naiche related that Geronimo was shot in the chest and still managed to mount his horse and escape. 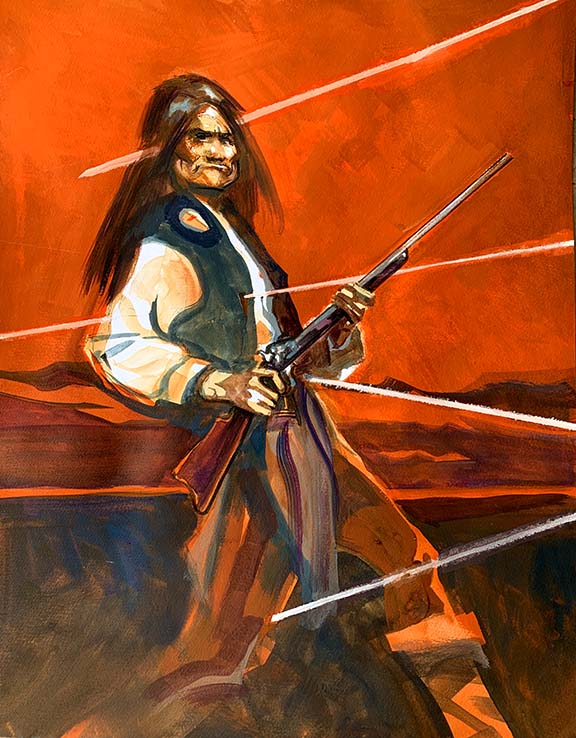 According to the artist E.A. Burbank, who was a guest in Geronimo's home and painted his portrait numerous times in the late 1890s. In one of these sessions, he reported that Geronimo bared himself to the waist. The artist recounted, "I was dumbfounded to see the number of bullet holes in his body. I knew he had been in many battles and had been fired on dozens of times, but I had never heard of anyone living with a least fifty bullet wounds on his body." Burbank went on to say, "some of the bullet holes were large enough to hold small pebbles that Geronimo picked up and placed in them. Putting a pebble in a bullet wound he would make a noise like a gun, then take the pebble out and throw it on the ground."

"Bullets cannot kill me!"
—Geronimo
Posted by Bob Boze Bell at 11:17 AM