My Life As A Guest Lecturer

September 26, 2019
It was a privilege and an honor to give a lecture yesterday at NAU (Northern Arizona University at Flagstaff) on how not to make it in media. I am somewhat of an expert in the field having failed at so many endeavors from rock 'n' roll, to underground newspapers, to morning drive radio to Playboy magazine. Oh, and True West. 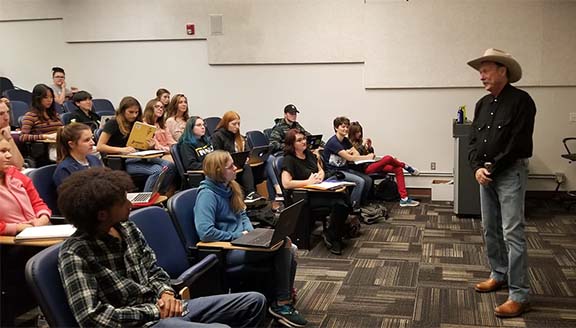 Holding Court With One Lie After Another

The class is Introduction to Journalism and the professor is Martin Sommnerness. I tried to keep in mind that these kids are post 9•11. They were born after the World Trade Center attack.

I aimed my remarks at this idea: I once sat where you are sitting and for the past fifty years I have been in hostile territory, on the road you are about to go down, and I have come back to give you some of the road signs to look out for and what to expect and how not to get lost. I promised to reveal trade secrets and how to get past the crowd at the foot of the ladder.

They seemed to enjoy some of my stories, but I ran into one sobering fact: virtually all my cultural references are history, as in, they don't connect.

• Hugh O'Brian as Wyatt Earp: never heard of the actor, the TV show or the historical character.

• Paul Newman in "The Left-Handed Gun": never heard of him, although one of them said, "Isn't he the salad dressing guy?"

• The Beatles on Ed Sullivan: their grandparents love the band but they've never heard of the show.

• "Standin' on a corner in Winslow, Arizona": one girl, in the blue hair, in the photo above, knew the song and the name of the band, the Eagles. Everyone else just stared at me like I was talking about Al Jolson.

To them the Watergate break-in is in Gettysburg territory. It's ancient history and has nothing to do with them. This is not a put down. It's just how life goes. If some old guy came into one of my classes at the U of A in 1967 and started praising Benny Goodman I would have rolled my eyes as well.

"Everything you love will be taken away."
—Slaid Cleves
Posted by Bob Boze Bell at 9:12 AM