September 17, 2019
Gathering up quotes for the Geronimo book. Got some good ones.

"Bob Boze Bell is rightly celebrated for his historical artwork and for his narrative contributions to western American history. Geronimo is an ideal subject for this combination, and Bob does him full justice—in part, I suspect, because he probably got most of his information from my biography of Geronimo."
—Robert M. Utley, aka Old Bison

"Bell gives us a whole new and unexpected perspective on Geronimo in his trademark, inimitable style, complete with illustrations only his masterful pen and brush could create. Bravo, Bob Boze Bell."
—Juni Fisher

"Geronimo—patriot chief or natural born killer? Bob Boze Bell answers that controversial question and many others in this provocative new biography of America’s most famous Indian warrior. Fasten your seat belt for this one! Bell’s trade-mark blend of superb artwork, authoritative research, and fast-paced prose—always accompanied by a wicked sense of humor—makes this another masterful, must-have Boze western book."
—Paul Andrew Hutton

"As few should recall I went twice in the '60s on extended tours as correspondent to the Vietnam War—filing hundreds of thousands of words plus acres of photography of battles, riots, coups, air strikes, profiles, nation building, ambushes, civic actions, heroes and flunkies—and of it all, my only brilliant line was, 'Is Geronimo alive and well in the Central Highlands of Vietnam?'   If so, I ventured, the world's greatest military power was about to lose a war.  Godspeed with your book."  —Don Dedera, legendary Arizona journalist and author, "A Little War of Our Own"

"It's been said that a book worth reading is worth buying.  Bob Boze Bell's book on Geronimo is worth reading, so buy Bob's book."
—Chris Enss, New York Times best-selling author

“I hope he explains the paratroopers.”
—Thom Ross, Artist

Okay, wise guy: In 1940, on the eve of WWII, the Army was in the process of figuring out how to drop troops out of airplanes. The night before the first test jump, some of the soldiers from Fort Benning went to the movies and saw the 1939 film "Geronimo" starring Preston Foster, Andy Devine and Chief Thundercloud. 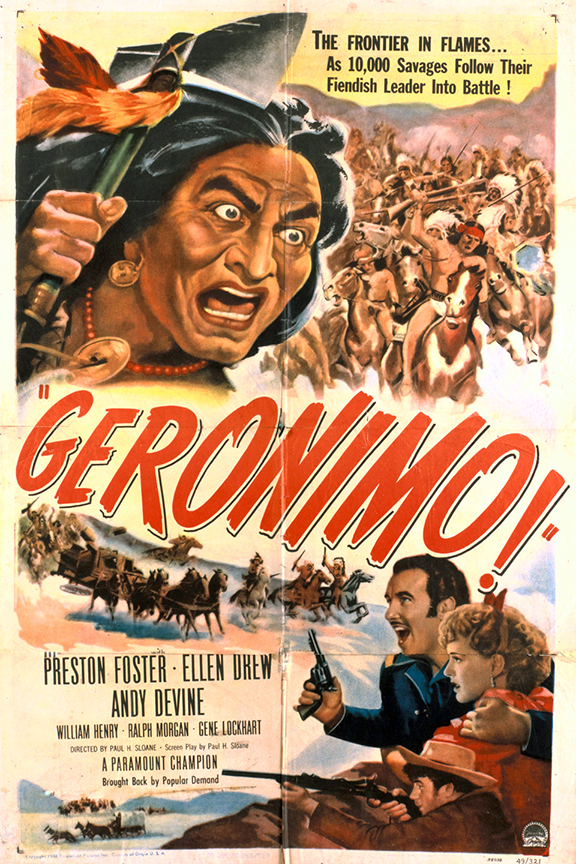 After the movie, one of the soldiers, Private Aubrey Eberhardt, bragged he wasn't afraid to jump and his fellow soldiers laughed and ribbed him saying he would probably forget his name at the door, which was a put down because all the soldiers were supposed to shout their names as they jumped. The next morning everyone made their jump successfully but when the smart ass Eberhardt came to the door he shouted "Geronimo!" Everyone laughed and thought that was great and this started a tradition in the squadron. The army brass didn't like this and tried to discourage it, which only made it even more popular. From there it caught on to include any dangerous jump or feat of daring.

I'm Bob Boze Bell and this has been a True West Moment.

"When Geronimo jumps out of an airplane, does he yell, Me!"
—Old Smart Ass Saying