September 21, 2019
I got to laughing with Dan The Man Harshberger yesterday about all the chapter heads I want for the Geronimo book. The problem, as I told Dan, is that the G-Man did so many crazy things in his life. In addition to being a warrior, he also became "an immaculate homemaker" and a first class huckster (selling his autograph and the buttons off his coat), but in addition to all that, he also became a schoolmaster, a judge and—hold onto your hat—a Cowboy! 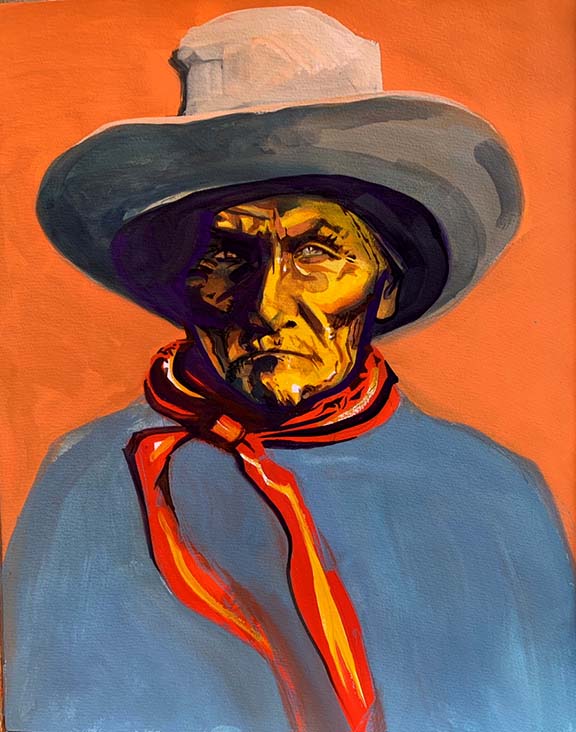 Here's how that happened.

Judge Geronimo
When the Chiricahuas were transferred from Florida to Alabama in 1888, Lieutenant William Wallace Wotherspoon, the commander in charge of the Apaches, made Geronimo a justice of the peace at a monthly salary of $10.50. Wotherspoon directed the unrepentant, old warrior to resolve any internal Chiricahua disputes and rule on misdemeanors under anglo law. In the beginning, Geronimo threw the book at everybody—almost literally. He sentenced one Apache to six months in the guardhouse for being drunk and another Apache got a sentence of 100 years in prison for being drunk and fighting. It's probably safe to say, the G-Man was used to being judge-jury-and-executioner. After some temperance training, Geronimo got the hang of the justice system and became much more moderate, and fair.

The Schoolmaster
When the Chiricahuas were sent to Mount Vernon Barracks in Alabama, Geronimo took it upon himself to support a school for the Apache kids. When the promised teachers were delayed by nine months in arriving, Geronimo appointed himself the schoolmaster and rounded up all the kids and made them go to school. He trained them as he had been trained with very strict discipline, especially the boys. One eye-witness said he paced the schoolroom with a stick in his hand to keep his charges in line.

The Apache Cowboys
First Lieutenant Hugh Lenex Scott was stationed at Fort Sill when the Apaches arrived in 1896. Scott was already widely respected by the Comanche, Kiowa, and Kiowa-Apache also held there because he understood and used the sign language used universally by the plains tribe. Scott was known among all the In-dins as the Sign Talker. 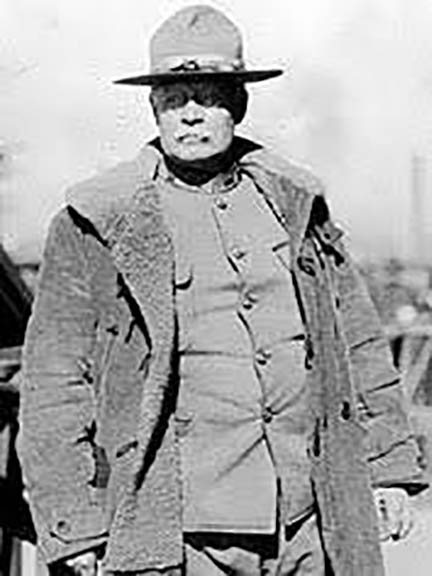 Meanwhile, the colonel commanding Fort Sill was outraged that the Chiricahua were being sent there and planned to keep them penned up in a stockade. Scott knew if that happened there would be war and he told General Miles about the colonel’s plans. Miles transferred the colonel to a post in the east and put Scott in charge of the Apaches. Congress had appropriated money to buy a herd of 10,000 cattle for the Apaches and Scott had troopers in his command who were cowboys and they helped train the Apaches, who were excellent horsemen to begin with, on how to flank and rope cattle. The Chiricahuas took to it like fish to water.

The first winter many of the Apaches didn't have horses and ran on foot herding the cattle. 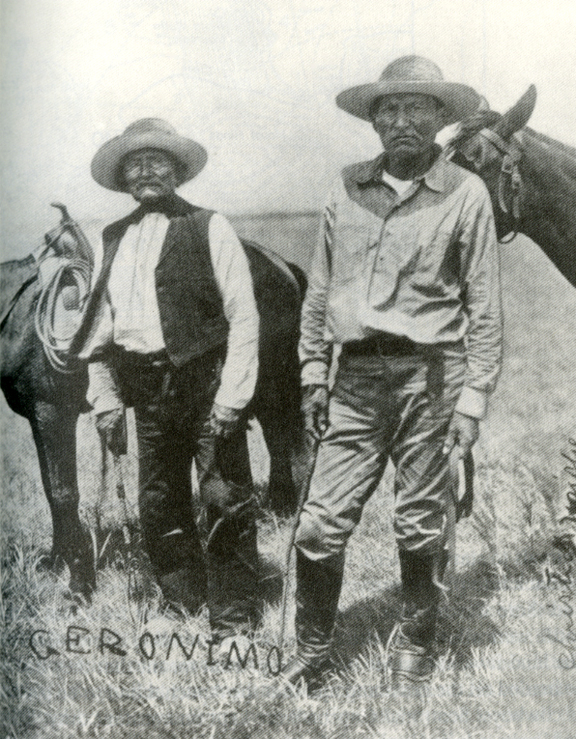 Captain Scott described Naiche as "a straightforward, reliable person. When he was in charge of the cattle herd I could depend on him completely in every weather, and he never disappointed me.” Scott didn't have as high opinion of Geronimo, who he described as, “…an unlovely character, cross-grained, mean, selfish old curmudgeon, of whom . . . I never heard recounted a kindly or generous deed.”

Most of this information, above, is from W. Michael Farmer's new book, "Geronimo: Prisoner of Lies." I highly recommend it. Here's Farmer, once again answering several of my other questions:

"By the time Asa Daklugie, Geronimo’s nephew, arrived at Fort Sill from Carlisle in 1895, the herd was well established but in poor shape. He had studied cattle husbandry at Carlisle and lived on cattle farms there in the summers. When he saw the condition of the cattle he went to Scott and nearly got into a fight. Scott talked to George Wratten, the long time interpreter for the Chiricahuas who ran the trading store, about who the ruffian was who wanted to take over Fort Sill. Wratten told him Daklugie just wanted a job so he could marry Ramona Chihuahua, was widely respected among Chiricahuas, and knew what he was doing with cattle. Scott put Daklugie in charge of the herd and Daklugie did a superb job of getting the herd in shape, taking care of  things like black leg and ring worm the other Apache cowboys did have a clue about. The herd became the prime money maker for the Chiricahuas within a very few years.

"The Apaches worked through the first winter cutting timber to be sawed for their houses and smaller trees for fence posts. They strung over fifty miles of barbed wire to keep their herd on Fort Sill land and out of their villages. They had to ride the fence and keep a watchful eye for rustlers. Nearly all the older men and some of the younger ones farmed. Geronimo was a farmer, but occasionally, I suspect, although there is no record that I know of, rode to help move the herd. Naiche spent most of his time farming too after the fence was up and not as many 'cowboys' were needed for the herd.

"When the Chiricahuas left for Mescalero in 1913 the herd was sold to prevent the chance spreading of tick fever. The Fort Sill herd was considered one of the best in the state. It made enough money that the Chiricahuas in Mescalero were able to buy excellent stock and reestablish themselves as prime cattlemen in NM."

And here is Towana Spivey's take on the Apache Cowboys

"The Apache POWs were encouraged to get involved in both agriculture and ranching operations upon their arrival at Fort Sill in Oct 1894 and they took to it readily.  Unlike the other tribes (Comanche, Kiowa, Plains Apache, etc.) who were administered under the Indian Agency at Fort Sill and Anadarko, the Apache POWs were enlisted into the army as soldiers and scouts at the same time as they worked as blacksmiths, cowboys, farmers, etc. under the authority of the army instead of the civilian agents.  They introduced Kafir Corn to the region that was more resistant to the heat; constructed soil conservation ponds, etc across the Fort Sill area; and did most of the fencing of the reservation to impound their herd of 10,000 head of cattle.  They conducted breeding programs to upgrade the quality of the cattle and regular roundups were held to brand and treat the cattle.  One Apache cowboy was killed during one of the roundups from a bucking bronc.  This was a communal herd owned by the Chiricahua and Warm Springs Apache as a whole, not by individuals."
—Towana Spivey

Meanwhile, just got this from Edmundo Segundo:
"Many moons ago I was on a Geronimo research trip in Mexico with Bob when the wildest looking old man came riding up from behind the ruins of the historic church in Janos, where Geronimo's first family was wiped out. The rider, who we later found out was 83, said he was the grandson of Victorio. It was a surreal scene with two nearby men trying to restore an injured, cockfighting bird. That experience alone made me a believer in all the crazy stories in this book."
—Ed Mell

All true. I believe this trip was in 1996 when Ed and I took our sons, Tommy and Carson on the Copper Canyon Railway deep into the Sierra Madres. On the way back to the U.S., thanks to our guide, Paul Northrop, we stopped in Janos and met the above mentioned Victorio. Somewhere I have photos of Victorio and the church and the cockfighters and the injured cock. If I find them. . .you'll be the first to see them.

“The finished product is a result of a series of organic, creative mistakes—perception itself becoming the editor of the final report.”
― Spalding Gray, Swimming to Cambodia
Posted by Bob Boze Bell at 12:49 PM