When Death Stalked Every Trail

September 8, 2019
It is a well worn cliche that the Old West was a dangerous place. But, somehow in our current rush to politicize history—scrub it clean over here, dump all the evil over there—we forget just how dangerous it was for EVERY person who was out on the deserts of the Southwest, from Taos to Tucson, from Yuma to Baja. The edict, kill or be killed, loomed like a dark cloud over all the landscape. 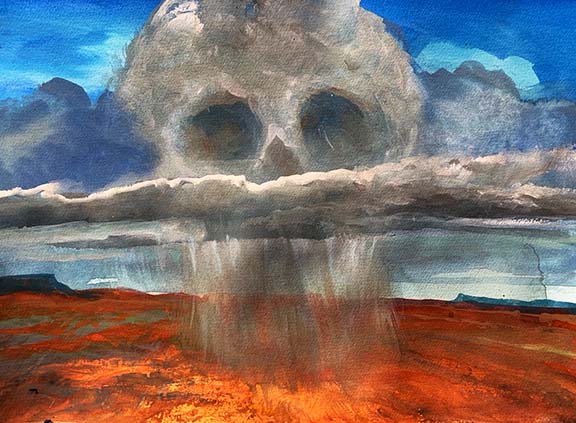 Daily Whip Out: "Death Rolls On"

Still, if you dig deep enough, out of that overwhelming violence comes a faint, but sweet, brotherhood that can be breathtaking. When Lt. Britton Davis of the U.S. Army said that the Apache Chatto was "one of the finest men, red or white, I have ever known," it strikes a chord of harmony sweeter than any music I have ever heard.

In fact, it's the ones who see the humanity in all of this ugly violence who are the true heroes. Captain John G. Bourke, going to bat for the Apaches imprisoned in Florida and losing his career over it. Alchesay, who rose above the petty politics of the White Mountain Reservation wars, and who had a school named for him, these are the ones we should remember and celebrate.

Instead, we put halos on killers and give them powers and virtues they never had. I don't think I can change that, but I can cast a light on it.

"Hundreds of dead animals  were met at every turn. . .Death reigned before our eyes."
—A. Frank Randall, a photographer and correspondent for the New York Herald with Gen. Crook on the trail of Geronimo in Mexico