The Hotshots Who Saved All Our Houses

May 19, 2020
I mentioned in yesterday's post that we survived the Seven Sisters Fire, and that we weren't evacuated and that when we woke up in the morning the fire was out. All true, but here's the rest of the story. Big flames over the Seven Sisters

The Hotshots Who Saved The Day
My neighbor Bob Hoss was about ready to leave on Sunday night when he looked at the fire one more time, and he told me he saw a big swath of flames coming down over the mountain, but then he noticed that some of it disappeared. There were no air drops so he wondered what was going on so he grabbed his binoculars and, he told me,  "I could see these tiny white spots moving in front of the flames. I soon realized that it was firemen in shiny white suits with head lamps and they were fighting the fire head on!" 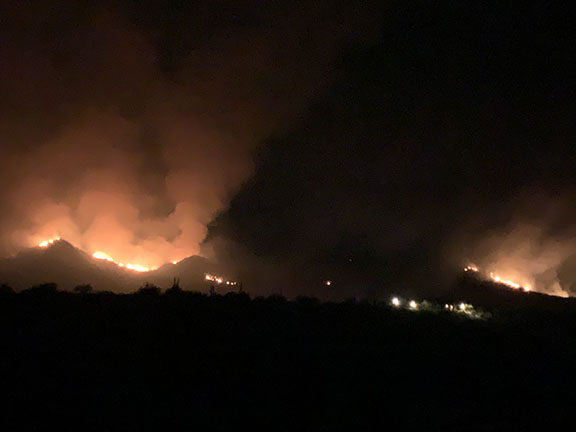 Bob Hoss's photo of the fire. He maintains
those little white spots at middle right are fires, but I wonder if those aren't firefighters?

Bob Hoss continues: "I watched them fight the fire for about two hours. They would strategically get ahead of the fire and then seemingly surround it and let a tree burn for a while and then they would somehow douse it. Chunk by chunk they fought that line, pulling back here, getting aggressive on another side. I stayed up until midnight but by then the fire was stopped dead in its tracks. There was a flare up at one point in a straight line and I assumed it was a backfire, behind the main fire line. I counted about 45 guys on the fire line."

The fire was set to overtake several houses, but they stopped the fire just short of each one. You can see them in the photo, below.

Here is how the Seven Sisters looked this morning. 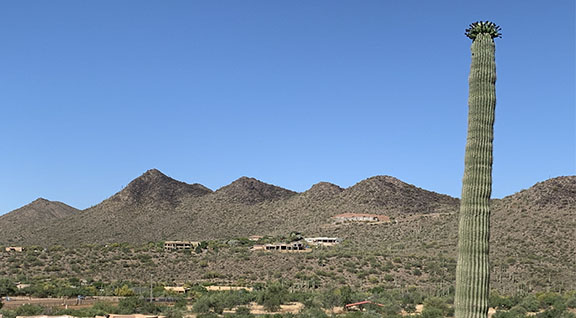 Six of the Seven Sisters With Burnt Tops

"When I was in the army at Fort Ord, we were volunteered to go fight a fire and they put us in these suits and we had to run up into a canyon and dig out a six foot fire line. With all that heavy equipment on and trying to hack and dig out the undergrowth we were completely exhausted in two hours flat. We were so tired we could hardly move. How those hotshots do this for hours on end, is nothing short of amazing."
—A friend of mine marveling at the bravery and stamina of the hotshot fire fighters
Posted by Bob Boze Bell at 12:25 PM