A Vivid Memory of Monument Valley

Painters call it a "happy accident." That's when crazy circumstance collides with luck to create something beyond what was intended. Here is a very good example. 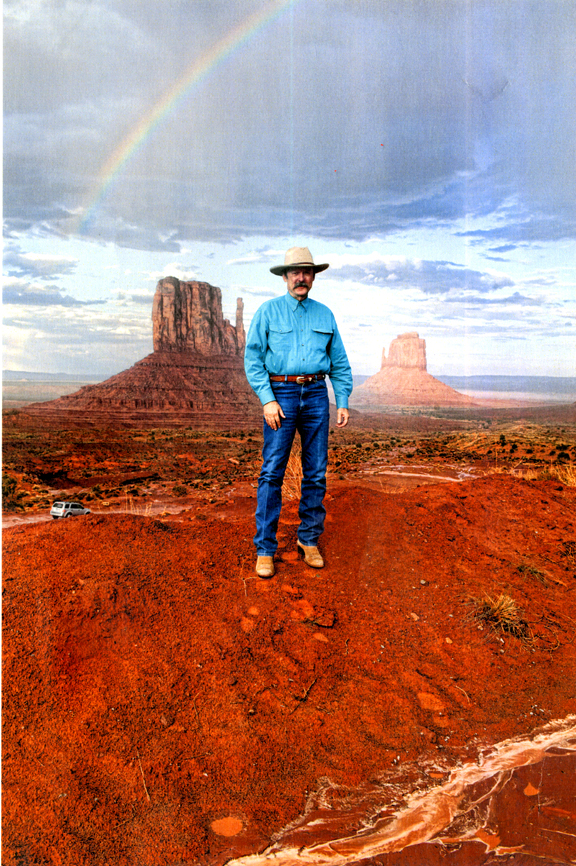 BBB at The Mittons In Monument Valley
After A Rainstorm

This is perhaps my most favorite photograph of myself, ever. I even love the car in the mid-background. And especially the arc of the water running at lower, right, in the same arc as the double rainbow. Here's what I said about it in 2012 on my blog after a park ranger asked me if the image was Photoshopped:

Yes, the photo is real. Last summer me and my True West crew got to Monument Valley at about five p.m. in the middle of a thunderstorm. Looked like we couldn't film (we were there videotaping for a Westerns Channel project). We drove down off the mesa where the View Hotel is, and at the second turn, the rain stopped and a double rainbow arced over the left Mitten. We quickly jumped out to tape a True West Moment and as Ken Amorosano scrambled to set up the camera, I jumped a rivulet of water, climbed the berm and turned around for the signal to start taping. Lucinda Amorosano snapped this photo just before, or just after I started my spiel. She shot another ten or twelve photos but this one just pops. I think it's my favorite photo of any that have been taken of me (appearing to stand tall, in a tall place, maybe? Ha.).  One of those happy accidents as we painters are fond of saying.
"We are our memory, we are that chemical museum of inconsistent forms, that pile of broken mirrors." —Jorge Luis Borges
Posted by Bob Boze Bell at 10:58 AM