The Bottom Line On Being Skunked

Regarding yesterday's skunking, I got this from a historian-musician-author friend down Nogales way.

"One time semi-long ago Tombstone had an actual bookstore. I was invited to do a talk about my Badger Clark book. Badger actually lived near Tombstone for four years which was about twice the time spent there by the Earps. It was a typical Tombstone weekend with dozens of costumed old people walking up and down the streets. I was happy to recite some of Badgers well known verse or share some of his prose. I was happy to sing some well known cowboy songs which were Clark’s poetry put to music. I didn’t sell a single book that day. Oh, the store sold many books while I labored on, mostly by some fellow named Bob Boze Bell!"

Okay, first of all, I loved that bookstore across from Hafford's Corner in Tombstone and miss it every time I go down there.  Anyway, you bring up a great point. While I'm whining about getting skunked you were getting skunked by my books! That is so rich—and so ironic. And, to underline your point, I remember being at a bookstore on east Speedway in Tucson, where Linda McCartney used to come in and just sit and read books. This was in the early nineties and I was there for a book signing with Will Rogers' son, Will Rogers, Jr. In fact, the day I was there Fritz Scholder showed up to buy books as well. To say I was star struck is a bit of an understatement.  At the end of the day I sold maybe six to ten books while Will Rogers, Jr. sold hundreds of books with a line going out the door. The book store owner told me afterwards he bought Rogers' books "by the case."  Man, was that depressing and humiliating.
Will Rogers, Jr. died a week, or so, later, from a self-inflicted gun shot to the head.
So, there you go. I realized the amount of books Will Jr. sold that day, apparently didn't contribute much to his happiness. In the long run, if you're healthy, and you are hopeful, the rest really doesn't matter, does it? 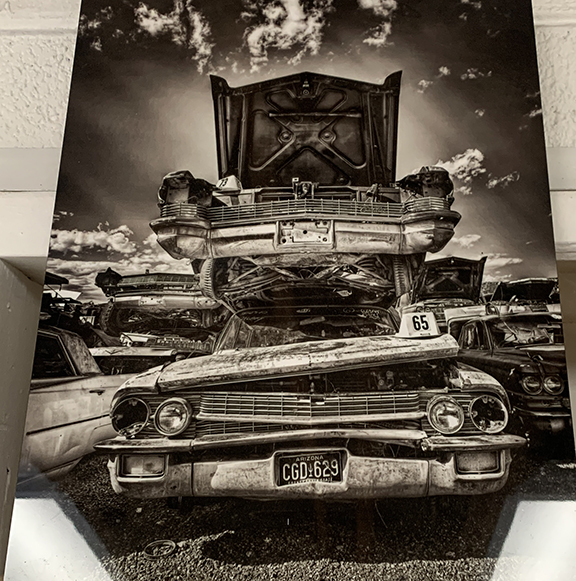 Graveyard In The Sky
By Cattletrack photographer Carl Schultz,
who is a fellow Cave Creekian
The Secret
"The secret to life is something to do, someone to love and something to hope for."
—Old Vaquero Saying
Posted by Bob Boze Bell at 10:13 AM