May 19, 2015
Hard to believe, but it's been 49 years since I attended my first art class at the University of Arizona in Tucson. I was an incoming freshman from a small town—Kingman—and me and my classmates were the first wave of Baby Boomers to blitz the campus scene, and, by sheer numbers, we blew out the allotted classrooms in the fine arts building (which was pretty new at the time) and the university had to rent studio space in an ex-shoe store on Speedway Blvd. Our drawing professor, Mr. Scott (complete with a French beret and a cigarette holder) was very brusque and loud (more than one female student fled from the class weeping from his loud critiques: "You call those hands!? Those are Platypus craws!"). Mr. Scott's first order of instruction was to beat out of us all our bad habits and preconceived ideas about drawing good pictures.

In last Sunday's New York Times Magazine there was an evocative piece about "Blind Contour Drawing" and how it liberated the author—Sam Anderson—and allowed him to do drawings with "little slivers of excellence." Anderson pointed out how the problem is control and how control, or, the attempt to control sabotages perfection. He adds, "you can't control your way out of control." The fine piece of writing reminded me of something I have known but sometimes forget. 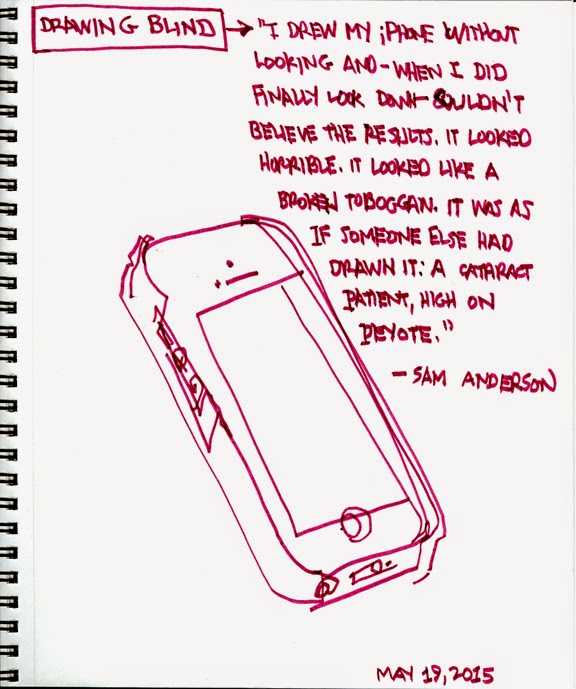 Inspired by the exercise, I bailed into a half-finished whip out and came up with this: 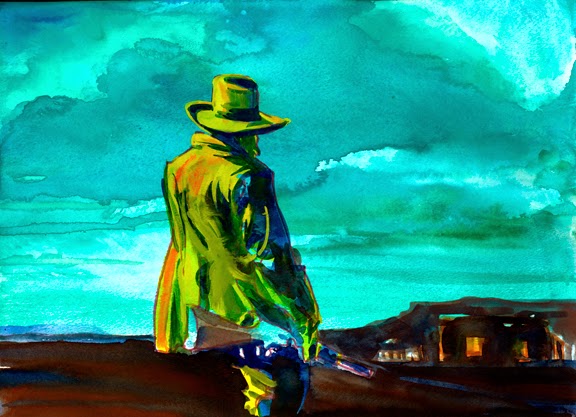 Daily Whip Out: "The Approach"

When I was at the Arizona History Convention a couple weeks ago, I bought "Shootout At Dawn," a book on the Powers Brothers shootout where three lawmen, who approached the Powers cabin just before dawn were shot dead ( a fourth lawman escaped). Whenever I read about lawmen serving warrants I think about how dangerous this work is and what trepidation must run through their minds as they approach the address in question, knowing it could be the last thing they ever do or see.

Meanwhile, back to blind contour drawings. Having just read the Vincent van Gogh biography I realized, after doing the contour drawings this morning, that a large part of Vincent's power stems from his letting go of the drawing, but controlling the color. This is a powerful combination. Vincent utilized very complicated color schemes and used his left brain to work overtime on every painting to align complimentary colors in very sophisticated ways, while at the same time shutting off his left brain when it came to the drawing and letting it go where it wanted to go and the result is vast slivers of excellence."

"As painters we must always remember that the spirit is more important than the fact."
—Harold Von Schmidt