May 20, 2015
There are over 250,000 mines in Arizona. When a representative of the federal government came out to see if Arizona was ready for statehood (early 1900s), the rep wrote off the state as "one big mining camp."

When I grew up in the 1950s Arizona was changing rapidly, but there was still a strong mining presence in all corners of Mohave County. We played in abandoned mines, going down ladders we shouldn't have even been looking at and, I'm ashamed to admit, we poached old mining claims, from inside tobacco cans and placed on wooden stakes that riddled the landscape. I kept a few of them for a while, but after a couple moves they ended up in the dumpster.

Maybe that's why I started a drawing this morning, which I finished at lunch, about a type of man I faintly remember growing up. 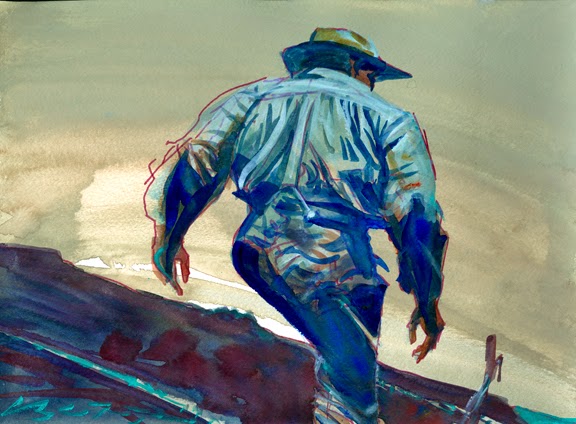 Daily Whip Out: "The Miner's Claim

"Whoever, in middle age, attempts to realize the wishes and hopes of his early youth, invariably deceives himself. Each ten years of a man's life has its own fortunes, its own hopes and its own desires."
—Johann Wolfgang Von Goethe
Posted by Bob Boze Bell at 2:36 PM