May 22, 2015
One of the wonderful perks of my gig is to have contact information on most of the prime authors and researchers in our field. When I mentioned in a recent blog post that Sam Peckinpah was co-credited with the screenplay for "Villa Rides" (1968) I wondered about the rest of the story. 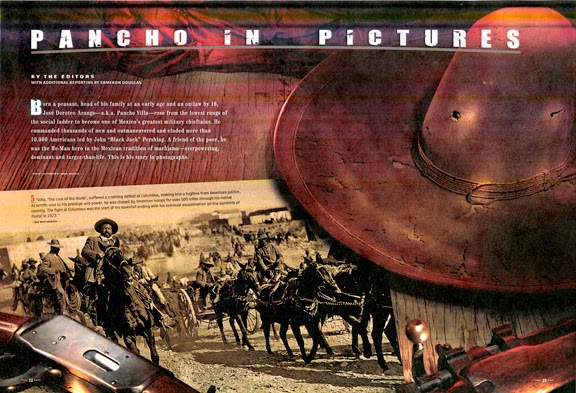 A sneak peek at our Pancho In Pictures splash page in the next issue of True West.


So I contacted Paul Seydor. We ran an excerpt from Paul's new book "The Authentic Death & Contentious Afterlife of Pat Garrett and Billy the Kid: The Untold Story of Peckinpah's Last Western Film." So I asked him and here is his reply:

"Sam wrote an early version of the script; Brynner read it and said Peckinpah knew nothing about Mexico (!) and demanded Peckinpah be replaced. End of Sam’s involvement, though a lot of his research thereafter informed The Wild Bunch screenplay, which he turned to next. That was the silver lining in this particular cloud and I have always been glad Brynner had him removed. If this hadn’t happened, there would likely be no Wild Bunch, and that would have been a true tragedy—an incalculable loss."
—Paul Seydor
Posted by Bob Boze Bell at 11:54 AM