Mysteries Behind The O.K. Corral

May 1, 2015
How did a botched, misdemeanor arrest go from a footnote to one of the THE seminal moments in Old West history? That is a question we aim to answer in an upcoming issue of True West. 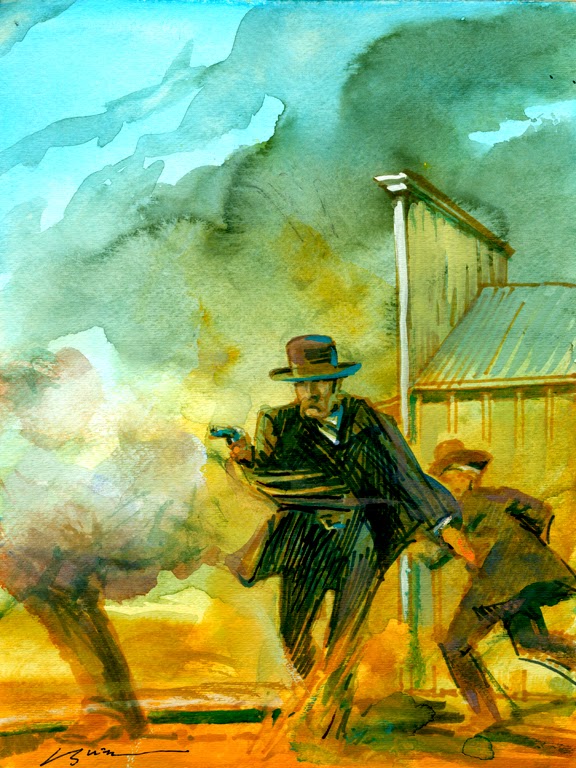 Daily Whip Out: "Wyatt Gets To Fighting While Ike Beats Cheeks"

Mysteries Behind The O.K Corral
For most of three decades, as cinema took hold of the world's imagination, the Tombstone story was more or less ignored. What happened in the 1920s to change that? And what did it take for Wyatt's story to finally take its place, front and center, in the hallowed grounds of Western myth and legend?

Part of this answer is found in a new novel by Mary Doria Russell. Here is her set-up:

"To understand the gunfight in Tombstone, stop—now—and watch a clock for thirty seconds. Listen to it tick while you try to imagine one half of a single minute so terrible it will pursue you all your life and far beyond the grave.

Begin your half minute with righteous confidence though you stand six paces from armed and angry men. They have abused you. They have threatened your life. Your rage and fear are justified. They are in the wrong. You are within the law. About all this, have no doubt.

Two quiet clicks. A breathless instant. The gunfire becomes deafening. When a sudden silence falls, just thirty seconds later, the life you thought was yours will be over. . .

Whatever your name, it will be blackened.

Every flaw, every mistake held up for scrutiny, condemnation, ridicule. Your secrets made public. Your reputation twisted and sere as a blighted leaf. Every accomplishment, every act of kindness or courage forgotten. Everything you were, everything you hoped for, everything you planned. . .gone.

Whether you live another five minutes or another fifty years, those awful thirty seconds will become a private eclipse of the sun, darkening every moment left to you. You will be cursed with a kind of immortality. Year after year, everything that did and did not happen during those thirty seconds of confusion and noise, smoke and pain will be analyzed and described, distorted and disputed.

A century will pass, and decades more. Still, the living will haunt the dead as that half minute becomes entertainment for hundreds of millions round the world. Long after you die, you will be judged by those who cannot imagine standing six paces from armed and angry men.

Not even for thirty seconds."

"That is damn near poetry."
—BBB upon hearing his wife read this opening aloud, while her husband drank coffee in bed, after returning from the Tucson Book Festival where Kathy bought a signed edition of "Epitaph."
Posted by Bob Boze Bell at 9:35 AM