May 20, 2015
Got up this morning and grabbed four patina boards and applied contour drawings to each, then locked 'em down. This is one of them. 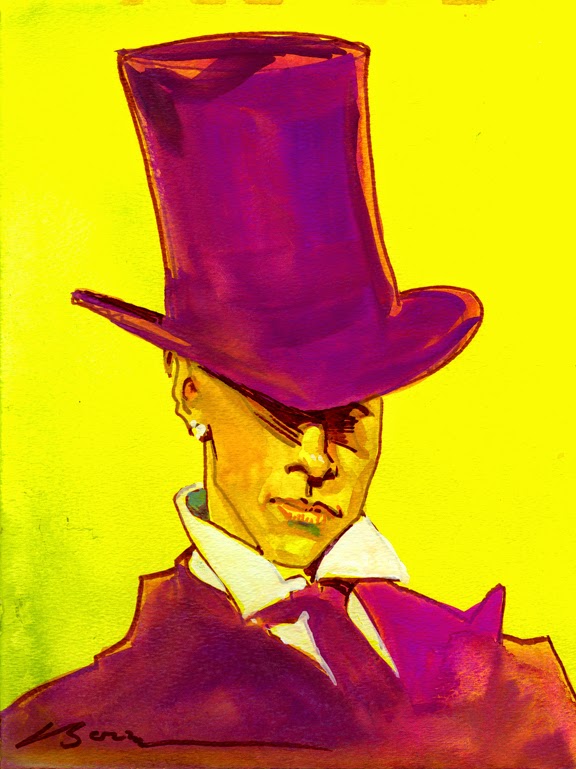 Just received the new book "American Mythmaker: Walter Noble Burns and the Legends of Billy the Kid, Wyatt Earp and Joaquin Murrieta" by Mark Dworkin. A wonderful book about the guy—Burns—who really made all three Old West characters into legends (and he's also the buy who brought me to the dance). As he tracts the genesis of the Billy the Kid legend, he gives credit to Ramon Adams, who Dworkin credits as positing the Billy arc goes like this: Pat Garrett and Ash Upson originated "infected legends,' Charlie Siringo "marketed them," Emerson Hough "spread them abroad" and Burns "made them immortal." That says it all.

After the huge success of the Billy book, Burns went looking for another character to write about and he landed on Wyatt Earp, but Earp was committed to his mining engineer friend, John Flood and his florid and horrid manuscript, so Burns says he's doing a book on Doc Holliday and would Earp help him with that, which Wyatt did. Then Burns' book "Tombstone: An Iliad of the Southwest" comes out and there is a chapter called "The Lion of Tombstone," which features Wyatt Earp in a very positive light. Instead of being flattered, or inspired, Wyatt dictates the following:

"Doc was not any pal of mine. Only an acquaintance. First met him in Dodge City. He was then practicing dentistry. Met him again in Tombstone. . ."

That Wyatt Earp—and his crazy wife—were that confused and dimwitted about the potency of their legacy is nothing short of mind blowing. There's more.

"My health will be back to normal when this story business is all done with."
—Wyatt Earp, one month before his death in 1929
Posted by Bob Boze Bell at 10:30 AM