May 15, 2016
I'm deep into the hunt for the Apache Kid. One night, around the campfire, Jim Young asked Mickey Free, "Why are you so intent on killing the Kid?" 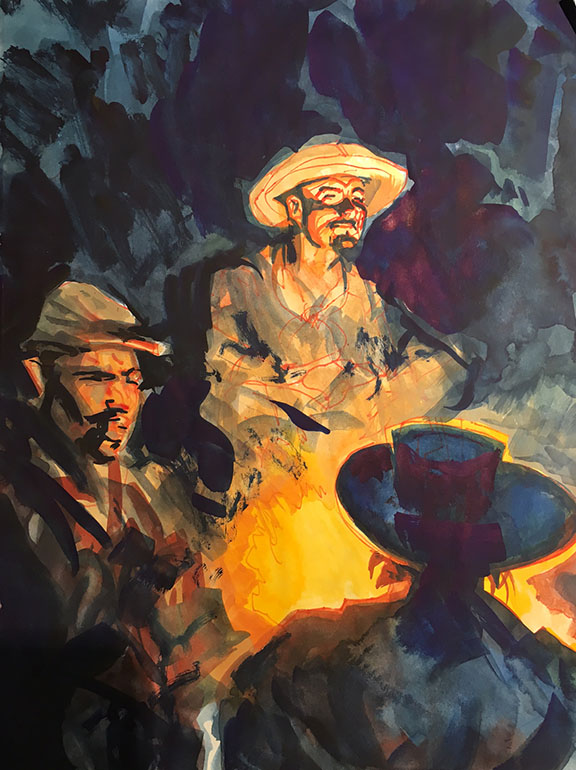 Both Tom Horn and Jim Young wondered what the heck Mickey meant by that. I have a strong hunch we will find out exactly what Mickey Free means in the August issue of True West which will feature "The Amazingly Accurate & Truth-Inspired Story Behind The Hunt for The Apache Kid."

The feature will come with this disclaimer: Half of this story is true. It's your job to figure out which half.

I have been rereading "Lonesome Dove" for inspiration and guidance. I wanted to revisit the epic tale and see if McMurtry indulges in any long, campfire exposition. If he does, I can't find it. He does, however, have some of the wittiest damn exchanges I have ever read. Here is but one of them:

"It's a funny life," Augustus said. "All these cattle and nine-tenths of the horses is stolen, and yet we was once respected lawmen. If we get to Montana we'll have to go into politics. You'll wind up governor if the dern place ever gets to be a state. And you'll spend all your time passing laws against cattle thieves."

"I wish there was a law I could pass against you." Call said.

End of quotes. Of course I don't think anyone can read these passages without seeing Tommy Lee Jones and Robert Duvall saying the words, but it's amazing that, according to Duvall, he was offered the Call role first and his wife at the time told him to hold out and take the Augustus role. Also, according to Duvall (in his exclusive interview in True West) he says he had to fight for Tommy Lee getting his part. The only reason Tommy Lee got the part is because James Garner had a back back and didn't want to ride a horse. Seems crazy to us now, and so self-evident, but then all great art has that effect on us.

I had forgotten just how great—and funny—this novel is. To me that was the problem in all the sequels and prequels: they had the characters and the plot points down, but they never matched the original humor of "Lonesome Dove," especially the cranky relationship between Woodrow and Augustus.

As for the story, it has what my writing instructors call "profluence," which is a fancy word for forward momentum in a story. It fairly zips along, with McMurtry juggling numerous characters, moving back and forth with ease. In Chapter 24, in one-half page of type, we get these plot points:

• Newt is so excited about the trail drive starting he can't eat, or sleep.

• The Captain told all the "hands" to "see to their equipment."

• Dish, Jasper, Soupy Jones and Needle Nelson were the only ones who were "better equipped."

• The Spettle brothers had nothing except "one pistol with a broken hammer."

• Newt had an "old saddle," no slicker and only one blanket.

• The Irishman "had nothing except what they had been loaned."

• Pea's most important equipment evidently was his Bowie Knife, which he spent all day sharpening.

• Deets got a needle and rawhide and sewed patches on his "old quilted pants."

• Augustus rode up with Lippy and assigned him to the horses.

• This "action" by Augustus moved Dish to "scorn." (he thought he should have gotten the assignment.

• Augustus took to inspecting the feet of his "main horse," "old Malaria."

Six paragraphs, 12 characters and a half-page of text, a small scenario compacted into a sprawling narrative that runs for 945 pages. That, my friends is genius. One more quote for the road:

"You should have died in the line of duty, Woodrow. You'd know how to do that fine. The problem is you don't know how to live."

"Whereas you do?" Call said.

"Most certainly," Augustus said. "I've lived about a hundred to your one. I'll be a little riled if I end up being the one to die in the line of duty, because this ain't my duty and it ain't yours, either. This is just fortune hunting."
—Augustus McCrae, who is foreshadowing his own death a couple hundred pages down the line.

"In the face of uncertainty about the future, people are looking at the past."
—Annette Gordon-Reed, co-author of "Most Blessed of The Patriarchs"
Posted by Bob Boze Bell at 3:13 PM