Daily Whip Out: "Fired On"

I'm telling you, there was no stopping Mick or that mammoth jack when they got their noses out of joint. We saw four riders on a ridge called the Matalo (Kill him). We could feel the heat from the fire even at that distance and we saw the puff of smoke and heard the whang of a Winchester borne slug that took a chunk of Mickey's poncho with it. Mickey pulled out his Sharps, got down on one knee and let loose with his Big Fifty. We saw the dust jump off the jacket of the shooter as he reeled in the saddle and toppled to the ground. The rest of those Cabrons rode back towards the fire, as Mick and his jack went in hot pursuit. 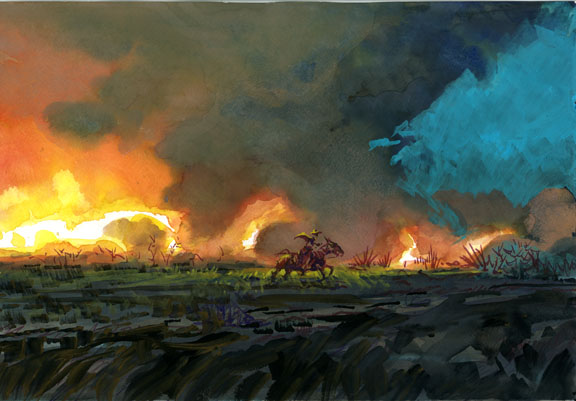 Daily Whip Out: "Skirting The Edge of The Blaze"

Doroteo's boys disappeared into a seam of the fire as Mickey rode on trying to get an angle on them. Unfortunately, the fire jumped out ahead of him and within no time had sucked up the backtrail. Now there was no going back, so he rode on into the teeth of the heat and the smoke. 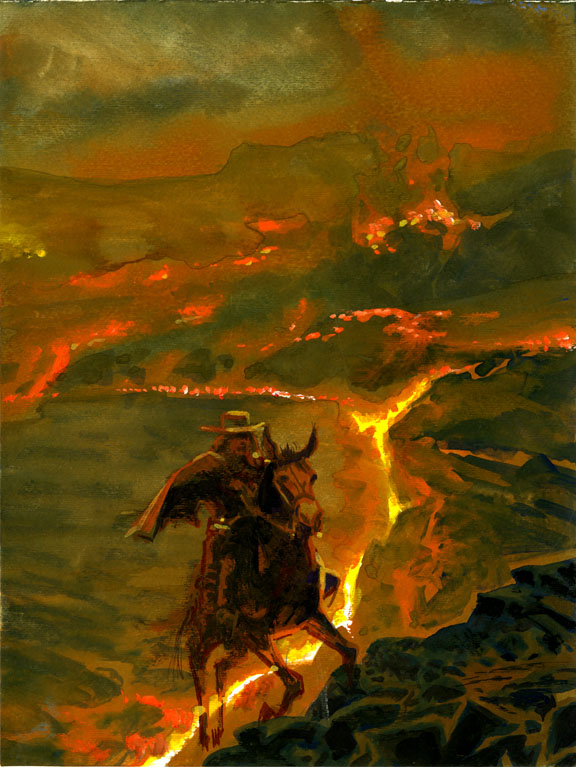 Daily Whip Out: "Hot On The Trail"

Trapped on a cliff, Mickey's mule jumped straight through the flames and they made it out the other side. Soon enough he climbed another ridge to get a better view of the battlefield, but it was fire and devastation in all directions.

Coming Next: "A tall cool one."