One of our Wyatt Earp issues is worth $300

May 12, 2016
People often ask me if their old True West issues are worth money. Well, honestly, you can buy most of our back issues on eBay for around the cover price, but there is one notable exception: 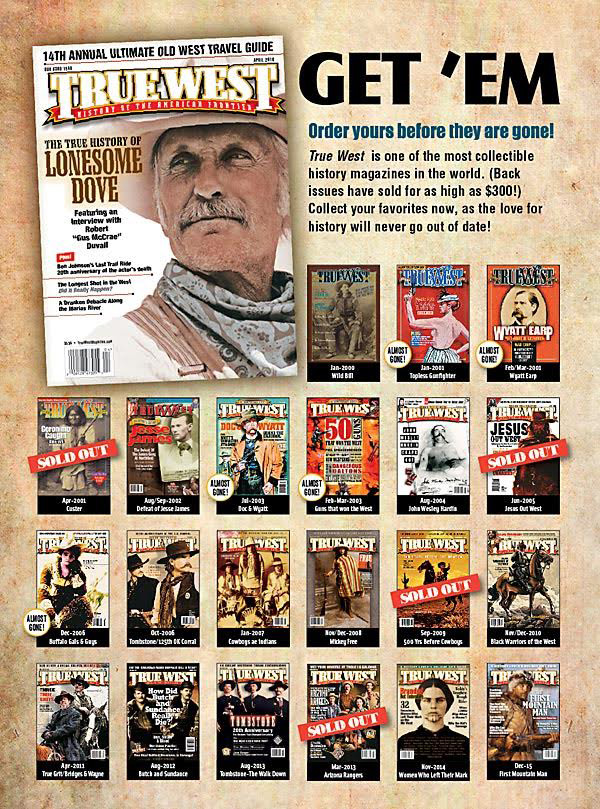 See that Wyatt Earp issue with the red cover in the first row, far right? Well, that little puppy sells for $300. It is a blockbuster issue, done way back in March of 2001. We had only just taken over the magazine from the previous owners and we were trying very hard to staunch the bleeding (we were losing $30k a month for the first year). Because a key person at the magazine quit in a huff (ahem) we grabbed 30 pages out of my Illustrated Life & Times of Wyatt Earp book and slapped it in the issue as a one-time bonus (we also included some other juicy Wyatt Earp bits including OKII, the classic O.K. Corral rematch in Tombstone of the Glenn Boyer gang vs. the Allen Barra gang) and it sold like hotcakes. In fact, it has the highest newsstand sell-thru of any issue we have ever published. When we got down to the final box of back issues we kept raising the price and they kept selling. The last two went for $300 each. End of story.

But Wait!
I was cleaning the garage a couple months ago and found two more issues. That's why it says "almost gone," in the above ad and not Sold Out, like this issue has been presented for the past several years. I think it's safe to say it's a good investment.

"The less you bet, the more you lose when you win."
—Wyatt Earp's creed
Posted by Bob Boze Bell at 5:10 PM