May 1, 2016
Where do you start a story? We all have the tendency to start too far back. For example, if it was up to Paul Hutton, every modern story would start with Davy Crockett. 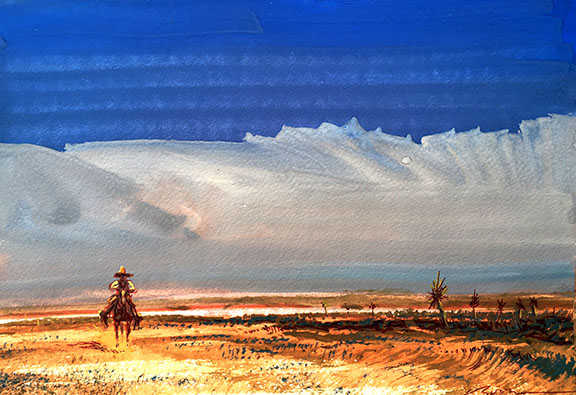 Daily Whip Out: "The Opening of 'The Mexicali Stud'"

Since all stories start in medias res (in the middle) it can be difficult to know where to start. Thanks to Stuart Rosebrook, who printed it out for me, here's the opening to the classic short story "Three-Ten to Yuma," by Elmore Leonard, which appeared in Dime Western Magazine in March of 1953:

He had picked up his prisoner at Fort Huachuca shortly after midnight and now, in a silent early morning mist, they approached Contention. The two riders moved slowly, one behind the other.

In the subsequent Glenn Ford movie, "3:10 to Yuma," (1956) which is based on the Leonard short story, we get all sorts of back story about his wife, the ranch, how he and his boys encountered a hold-up while looking for cattle, which indirectly led to the capture of the bad guy (Ford) because he lingered to make love to a saloon girl, but none of that is in the short story. We just go right to the heat of the story. Here's the next couple of paragraphs:

Entering Stockman Street, Paul Scallen glanced back at the open country with the wet haze blanketing it's flatness, thinking of the long night ride from Huachuca, relieved that this much was over. When his body turned again, his hand moved over the sawed-off shotgun that was across his lap and he kept his eyes on the man ahead of him until they were near the end of the second block, opposite the side entrance of the Republic Hotel.
He said just above a whisper, though it was clear in the silence, "End of the line."
The man turned in his saddle, looking at Scallen curiously, "The jail's around on Commercial."
"I want you to be comfortable."

Talk about economy. Get to it. Hit the opening running.

"All stories begin in medias res (in the middle of things), and all stories are arbitrary. Every decision you make has consequences, let the beginning start with an image. . ."
—Professor James Hynes, "Writing Great Fiction" (The Great Courses)

Meanwhile, it's been four days now since I've been rammed by an old man. Some old people were evidently lost in our neighborhood (not hard to do) and Kathy looked out at them stopped in our driveway and said, "Oh, look honey, another old man wants to fight you."

Okay, you know how I promised to reveal how Mitt Romney's great-grandmother figures into our story? Well, I didn't pay that off today. This is called "Burning Question Extension" The theory is, the longer I wait to tell you, the more you will want to know the answer. And, that is the ultimate goal of a "page turner":

"Suspense is questions that must, must, must be answered."
—James Patterson