Village of The 300 Widows & Mickey Heads Home With Head

May 28, 2016
The Top Secret Writer is in town for a book signing at Barnes & Noble. He's signing his new book, "The Apache Wars" which has gone into a second printing already. Afterwards he is coming out to the True West World Headquarters and we are going to jam on the final layouts for our cover story on Mickey Free and the hunt for the Apache Kid.

Worked up a new version of a familiar theme: 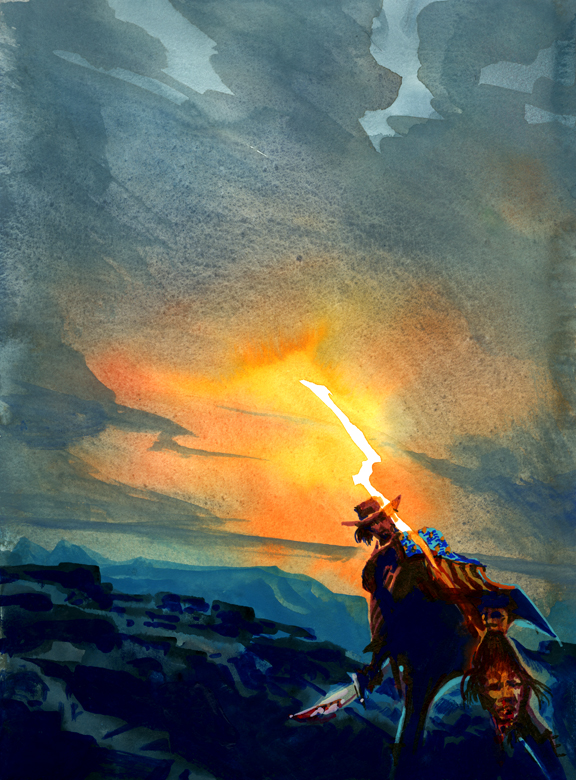 Mickey Free came home from Mexico with a head he claimed belonged to the Apache Kid. Many dispute this, but if it wasn't the Kid's, whose head was it? Playing with two titles: "The Trickster With The Sidewinder Gaze," and "The Head Hunters."

Meanwhile, one of the aspects of the story that is difficult, and I'm not sure we'll even get into it in the magazine excerpt, but how do you accurately portray the Kid and his women? We have a wonderful story from Lynda Sanchez that lays out the claim that Lupe was his daughter. So, what was the mother's relationship with the Kid? Was she kidnapped and forced to cook for him. Probably. Could they have fallen in love and had a warm relationship? Probably not. But in terms of a movie, or a graphic novel, we need to try and portray something between them. I mean they had a kid, which pushes the creativity towards something like Patty Hearst on the low side and "Dances With Wolves" on the other. 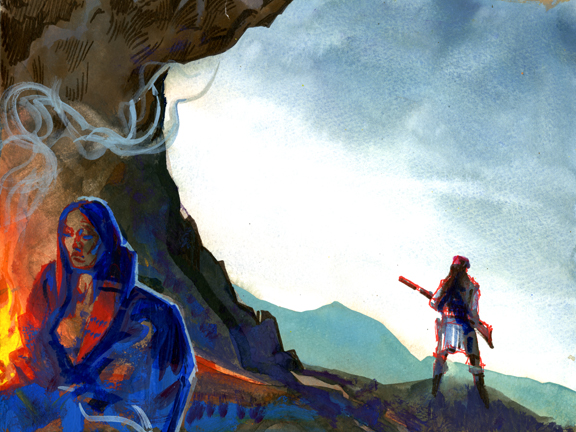 Daily Whip Out: "Prisoner Or Mate?"

John Langellier brought me a never-before-published photograph of three Apache girls who claimed to have been kidnapped by the Kid. At the bottom of the photograph, the women, actually very young girls, describe very specific details of their ordeals, for example, here are the notes: "I-vo-ash-ay, a San Carlos woman abducted from Reservation by Apache Kid in September, 1890. Escaped November 10, 1892 Was employed by troops as guide in pursuit of 'Kid.'"

If true, I think we can safely assume she was not happy with her abduction and helped troops try and track him down. And, she would know his favorite hideouts, so that is intriguing.

The second girl is ID like this: "Na-thethlay, a San Carlos girl stolen by 'Kid' after he had killed her mother, May 17, 1892. The girl was turned loose 5 days later."

This one is heartbreaking. Imagine cooking and cleaning for the brute who killed your mother? No wonder he let her go five days later, she was probably inconsolable.

The third girl is described like this: "Nah-tah-go-yah, San Carlos girl stolen by 'Kid' from Reservation October 25, 1892, retaken by troops from San Carlos December 27, 1892, when Kid' attempted to recapture Jo-ash-ay, No. 2, above."

This is confusing because No. 2 above is ID as Na-thethlay and not Jo-ash-ay but, if true, the photograph and the handwritten notes imply the Kid was very active in Arizona. The consensus seems to be he fled to Mexico and lived out his life there. I would post it but we are planning on running the photo in the August issue. So stay tuned.

As Mickey Free's crew rode deeper into the Sierra Madres they came to villages where the graves outnumbered the houses. Macho feuds and dog wars (a vaquero shoots someone's favorite dog and it escalates to oblivion) loaded up the graveyards.

Dust Storm Shenanigans
And, of course Tom Horn is a homicidal hoot:  "A couple years ago when we were down here hunting Geronimo, Mickey was captured by Mexican troops near Fronteras. They didn't believe he was American, so they tied his hands to his saddle horn and put a rope around his mule's neck and led him with a trooper in front and back. Well, long about dusk a freak dust storm roared out of the mountains and engulfed the troops who had no choice but to wait it out. When the dust cleared Mickey and his mule were gone. The trooper was holding a branch of a mesquite tree!"

"That doesn't make sense," our guest protested. "How did he get loose, then find a mesquite branch in the middle of a dust storm to replace the rope with?"

Horn just laughed. "Listen here, Mr. Prisoner, it takes skill to build a barn. Any jackass can tear it down. Tell your own damn stories, amigo." 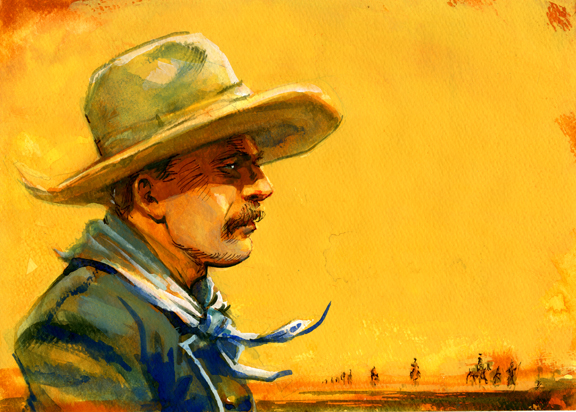 "You don't want to mess with Mick when his Irish is up."
—Tom Horn