Prescott Parade and Advice From The Historically Superior

July 3, 2016
Spent a wonderful couple of nights in the north country. Rode the True West stretch limo in the Prescott parade yesterday. 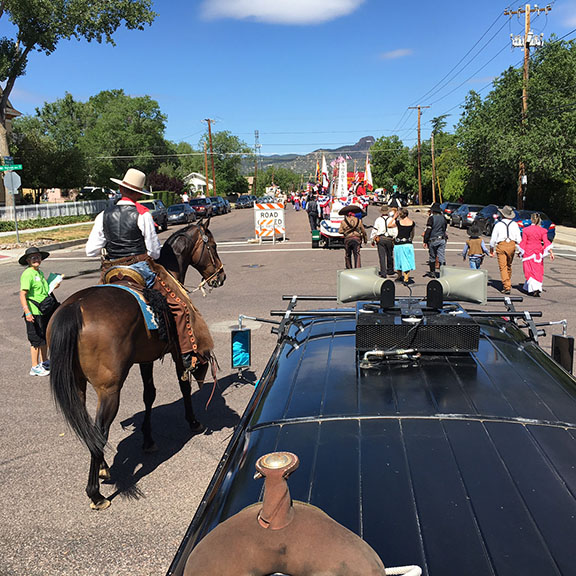 That's Lee Anderson on Concho, at left, as we approach the beginning of the parade.

Came home the back way through Peeple's Valley and Yarnell, then down to Congress and into Wickenburg where we took in the Route 66 Show at the Desert Caballeros Museum. Wanted my kids to see Al Bell's Flying A: Tommy, Pattarapan and Harper in front of Al Bell's Flying A display
at the Desert Caballeros Museum in Wickenburg.

Advice From The Historically Superior
Please quit promoting yourself as a historian. You seem to be a person who is genuinely interested in western history but you have a lot to learn before you can consider yourself knowledable much less an authority that is telling others and passing on bad info to people who believe you know what your talking about. It is embarrassing to those of us who do know what we're talking about when people tell us they heard things from you and we have to tell them the truth and show them where to research the facts rather than listen to someone like yourself who has lead them astray badly. Owning what used to be a good historical magazine doesn't make you a knowledable authority on history.
—Clint Whitehead

Clint,
For the record I have never referred to myself as a "historian." Second, what did I allegedly say that has you so convinced I don't know what I'm talking about? And third, learn how to spell knowledgable and the proper usage of "led.".

"Remember this: the farther up the flagpole you go the more people can see your rear end."
—Dandy Don Meredeth