The Renegades Captured by Wyatt Earp

July 8, 2016
On the evening of May 26, 1995 I got into it with a bounty hunter in the Crystal Palace Saloon in Tombstone. No blood flowed, but words were exchanged out on the boardwalk in front of Hatch's Saloon on Allen Street. The next day me and my pards—The Renegades—posed for a photo on the exact spot where the semi-altercation happened. 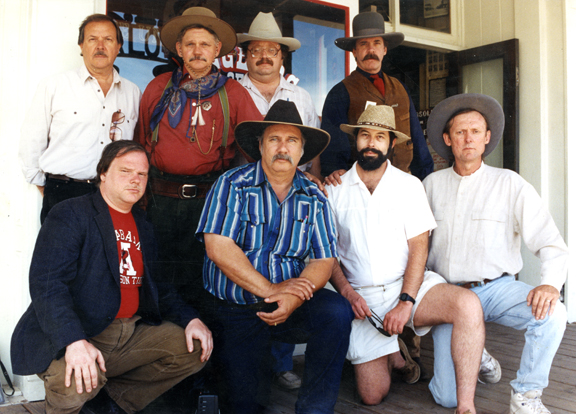 The photo was taken by Wyatt Earp. No, really. Wyatt Earp was in Tombstone that weekend doing a show on his most famous relative. When we got to the spot I looked around to see who might take the photo and there was Wyatt and his wife Terry walking by and I asked him if he'd take the photo and he did. That would be this guy: 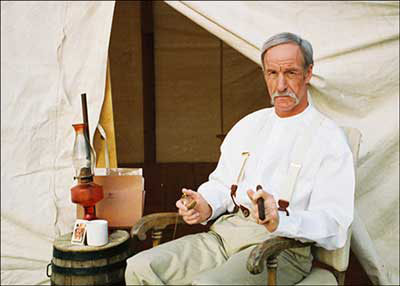 Wyatt Earp performing "A Life On The Frontier"

And you can check out his shows right here: Wyatt Earp's Life On The Frontier

Every person in this photo has played an important role in my life. It was Bob McCubbin who joined me in buying True West magazine and without his incredible photo collection and his initial financial investment there would be no True West today. Jim Dunham is the historical consultant at the Boothe Museum and he is a fountain of knowledge when it comes to history. Robert Palmquist is a lawyer who has specialized in the legal aspects of Tombstone and he knows more than anybody on this contentious subject. Jeff Morey knows more about the fight on Fremont Street than any living person and Paul Northrop has motored many a mile with me from Tunstall's Ranch in New Mexico to Canyon de los Embudos in Mexico. He is a trusted friend a boon traveling companion. Allen Barra is a prolific writer and his work has appeared in the New York Times and Newsday, among other notable publications. His book, "Inventing Wyatt Earp" is a must read. And Casey Tefertiller has written what many consider the definitive biography, "Wyatt Earp: The Life Behind The Legend." Both Casey and Allen have written excellent features in the next issue of True West. So stay tuned. 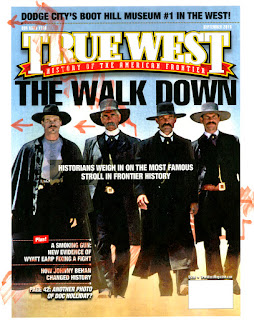