Tom Horn Cuts for Sign and Evenezer Gilpin Admits, "Nobody Can Soldier Without Coffee"

July 25, 2016
I get up at 5:30 and head out on the road for my daily walk. When I get back I start noodling ideas in my sketchbook. Pictures I want to do, ideas for future stories (Huck threatened to "light out for the territories" and I wonder what that story would look like?) Found a new pen and ink master I greatly admire: Franklin Booth. Joined the group and want to oder a book by him. Got a decent likeness of Tom Horn sifting sand and thought it might make a good study. 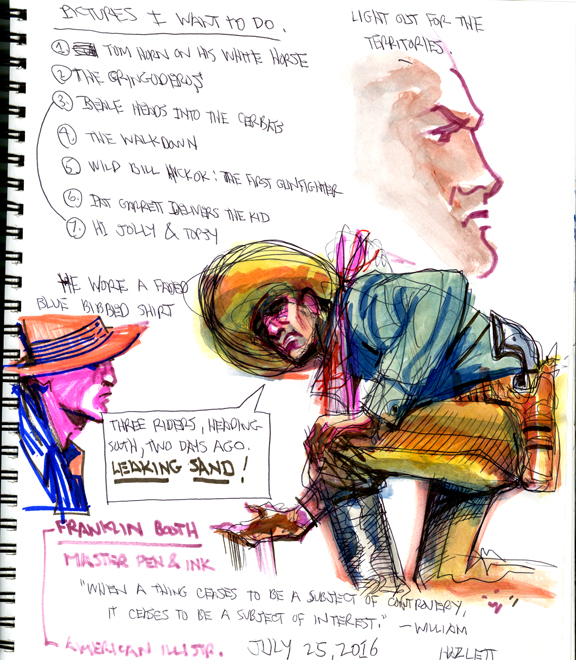 Went home for lunch and took a shot at the study I did in the morning of Tom Horn checking for sign. 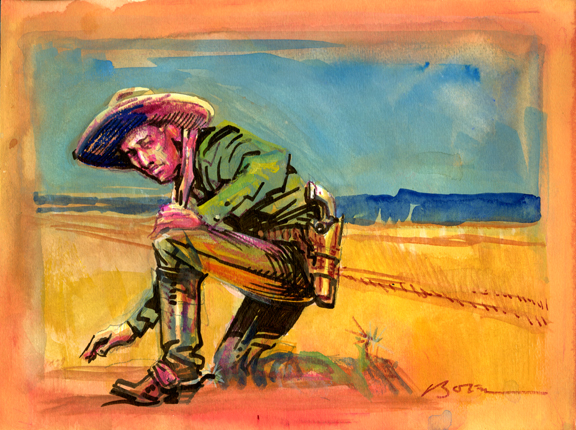 Had a good hat going, but ruined it. Went too far with the black. I could just kick myself, but, hey, you don't know how far you can go until you go too far.

Gay Mathis did a Civil War post this morning on coffee and I just have to share one of the lines:

In April 1865, at the bloody, bitter end of the Civil War, Ebenezer Nelson Gilpin, a Union cavalryman, wrote in his diary, "Everything is chaos here. The suspense is almost unbearable."
"We are reduced to quarter rations and no coffee," he continued. "And nobody can soldier without coffee."
Posted by Bob Boze Bell at 3:32 PM